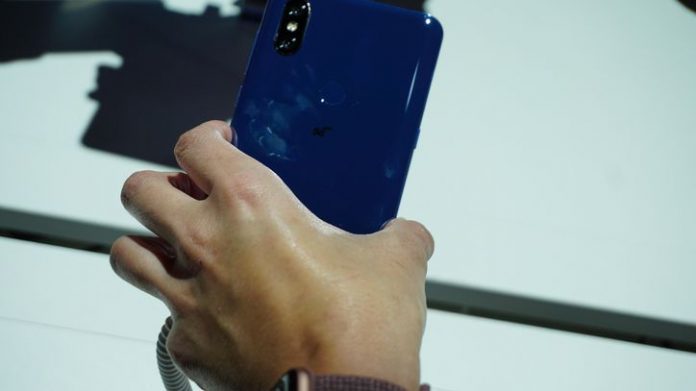 The flood of 5G phones continues.

Xiaomi on Sunday became the latest company to launch a 5G phone, the Mi Mix 3 5G. The device — a variant of the recently released Mi Mix 3 — will cost 599 euros ($679) and will launch in May.

Xiaomi’s initial 5G wireless partners include Europe-based Orange, Sunrise, Telefonic, Three, TIM and Vodafone. It didn’t mention any plans to bring the phone to the US.

“Essentially everything you loved about the Mi Mix 3 is now coming along with 5G,” Donovan Sung, director of product management for the Xiaomi global team, said Sunday during a press conference at MWC in Barcelona.

Xiaomi, when introducing the Mi Mix 3 in October, said it would come in a 5G version. At the time, it touted it as the world’s first such commercially available phone.

The Mi Mix 3 5G contains Qualcomm’s Snapdragon 855 processor and its X50 5G modem. It has the Mi Mix 3’s ceramic body and will be available in two colors, onyx black and sapphire blue. It uses the same camera setup and other features of the Mi Mix 3, including the device’s magnetic slider.

5G promises to significantly boost the speed, coverage and responsiveness of wireless networks. It can run between 10 and 100 times faster than your typical cellular connection today, and even quicker than anything you can get with a physical fiber-optic cable going into your house. It’ll also allow device to connect to the network faster, with speeds as quick as a millisecond to start your download or upload.

Experts expect 5G to change the way we live and even create new industries, much like how 4G LTE enabled the rise of apps like Uber, Instagram and AirBNB. Most carriers are just starting to turn on their 5G networks and manufacturers are still prepping their first 5G devices.

“5G will become reality in this year and will drive future innovations in various industries such as smartphone and IOT,” Wang Xiang, Xiaomi’s head of international business, said during the company’s press conference at MWC in Barcelona.

Several of Xiaomi’s rivals have made similar announcements over the past week. Samsung, the world’s biggest smartphone vendor, unveiled its first 5G phone last week during its Unpacked event in San Francisco, and Oppo on Saturday talked up its first, not-yet-named 5G phone. Other major Android vendors — including Huawei and LG —  are expected to announce their 5G phones later this week at MWC.

By the holidays this year, every flagship phone — at least when it comes to those running Google’s Android software and using Qualcomm’s Snapdragon processor — will tap into 5G, Qualcomm President Cristiano Amon told CNET in December.

Xiaomi, founded eight years ago, emerged as one of the hottest Chinese phone brands early in its existence, with fans clamoring to buy its latest phones. It even invites fans to its product launches, including Sunday’s event at MWC in Barcelona. But Xiaomi recently has struggled against rival Huawei, which last year sold nearly twice as many phones as Xiaomi.

Last year, Xiaomi’s sales rose 37 percent to 122.4 million units, according to Gartner. That made it the fourth biggest handset maker after Samsung, Apple and Huawei. Huawei’s handset sales increased 35 percent to 202.9 million.

While Xiaomi, Huawei and others have gained traction in markets like China, it’s tougher to compete in the US. That market is still dominated by Apple and Samsung.

Xiaomi is the first major handset maker to detail the pricing for its 5G phone. At 599 euros, the device could be one of the least expensive 5G phones on the market this year. It’s even cheaper than many regular 4G handsets on the market in the US. The iPhone XS, for instance, starts at $999, while Samsung’s new 4G Galaxy S10 is $900.

Most initial 5G phones on the market are expected to be pricey. Most companies — including Samsung — haven’t yet detailed what their devices will cost, but it’s believed they could be significantly higher than 4G LTE variants. OnePlus, for instance, told CNET in December that its first 5G phone may be $200 to $300 higher than this year’s flagship OnePlus 6T. That’s a whopping 36 percent to 55 percent increase over the older device.