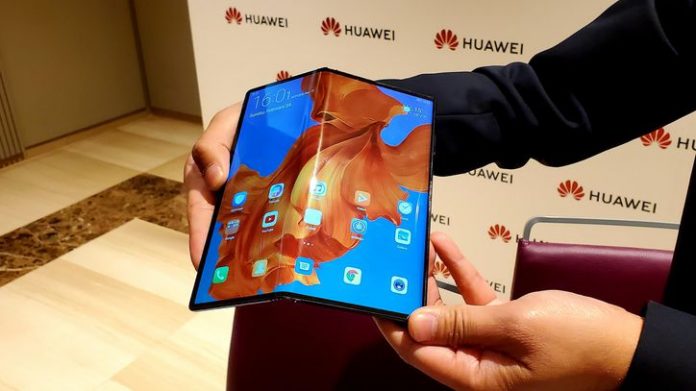 Huawei is certainly giving the attendees of MWC Barcelona something to talk about – and for once, it’s a controversy they’re likely to relish.

The Mate X emerges as Huawei faces intensified scrutiny over the security of its equipment and its ties to the Chinese government. Meng Wanzhou, the company’s chief financial officer and daughter of the founder, is under arrest in Canada awaiting extradition to the US for Justice Department charges related to alleged sanctions violations on Iran. The controversy is amplified by the rising tensions between the US and China over trade negotiations and the prospect of tariffs.

With all of those other troubles, what’s a little debate about the price of innovation?

Huawei’s presence at MWC is more than just about a single phone. The industry sees the debut of foldable devices as a defining moment in history, akin to the launch of the original iPhone, and Huawei wants to be at the forefront. It’s a chance to rewrite the narrative that has – rightly or wrongly — been forced upon the Chinese telecommunications giant.

“We want to show the world that 5G can make the world better,” Yu told a handful of reporters at MWC. “We are leading in this.”

Huawei founder and president, Ren Zhangfei, earlier this week denied any spying activity in an interview this week with CBS This Morning, and said his daughter’s arrest was politically motivated. (Disclosure: CNET and CBS This Morning share the same parent.)

Yu denied the allegations have had a negative impact on its consumer business around the world.

“Our customers trust us,” he said.

How the Mate X feels

Unlike the Galaxy Fold, which features a larger display that folds inward like a book, the Mate X unfolds outward with a large continuous display. When folded, the front forms a 6.6-inch display, while the back is a 6.38-inch. Both sides swing out to form an 8-inch panel.

I had a chance to try out the device and found it to be surprisingly polished considering how protective they are about the device. The two sides are a little stiff when you fold and unfold it, and it locks with a little latch the clicks in place. You push a button on the spine to release the other side, letting you unfold it.

Yu said the phone is rated for 100,000 folds. He said that would be more than enough for an average consumer. I responded that if I spent $2,600 on this thing, I’d be folding and unfolding it all day.

The spine acts as an ergonomic grip for the device when it’s unfolded. A screen that size can get unwieldy, and holding it with one hand while shooting it with my smartphone was workable because of that grip. Just don’t try to fold it back up with one hand – I almost dropped it when I tried.

“They made some interesting design choices that not only make the Mate X look different, but in many eyes better than Samsung,” said Carolina Milanesi, an analyst at Creative Strategies.

Ever since Samsung launched the Galaxy Fold on Wednesday, foldable devices have become a hot topic at MWC Barcelona, the world’s largest phone show. Even TCL, a Chinese company best known for televisions, showed off its Dragon Hinge, which enables a family of foldable devices.

Huawei’s one-upmanship at the press conference was clear from the get-go.

Yu touted its 5G connection, which the Galaxy Fold doesn’t have. The company says its Balong 5000 modem is able to tap into theoretical peak speeds that are double what you can get from Qualcomm’s 5G modem, the X50.

Yu also took a shot at the right notch on the inside larger display of the Galaxy Fold, noting that the Mate X gives you a full, “uninterrupted” screen. The Mate X embeds its cameras on the thicker right rail. The Mate X’s 8-inch display also tops the 7.3-inch screen on the Fold.

He also suggested that Samsung moved the launch of its foldable phone up because of Huawei’s Mate X. But the Mate X doesn’t launch until the middle of the year, and the Galaxy Fold comes out on April 26.

The Mate X won’t be sold in the US because of the ongoing controversy. Yu said the carriers want to work with Huawei but can’t because of political hurdles.

Elsewhere around the world, Huawei will still need to convince consumers that $2,600 isn’t too much for a phone.

Yu acknowledged that the price was high and said it would take at least two years before the cost went down to the level of one of its more mainstream phones. But he stressed that the level of innovation that went into the Mate X justifies the price, as the company looks to cement its reputation as a pioneer.

“Huawei has to change the conversation,” said Maribel Lopez, an analyst at Lopez Research. “Can they convince people they’re innovative? Sure, but it doesn’t really change the overall market dynamic for them.”

Bernie Sanders calls out Apple over $2.5B Contribution for California housing Catastrophe