Is there a Pokemon named DontDoThis? Maybe there should be. On Tuesday, a driver in Washington state was found parked on the shoulder of State Route 518 in the Seattle suburb of Burien. With him were eight smartphones, all opened to the Pokemon Go app. BUSTED!

Trooper Rick Johnson of the Washington State Patrol told me the man wasn’t driving while he played the eight different screens — his car was parked. But the overenthusiastic gamer was informed that the shoulder of a busy highway is meant for breakdowns or flat tires or the like. Not pulling over so you can pitch Pokeballs at a Snorlax.

“Sgt. (Kyle) Smith asked him to put the phones in his back seat and continue on, as the shoulder is only for emergency parking,” Johnson told me.

As you can see, the driver seems well-prepped for octo-play. His phones, of varying sizes, were all nestled into what looks like a homemade foam case that holds them all steady. Each screen was open to the gaming app.

The man put his gaming rig out of reach, and lived to play another day.

But distracted driving has caused accidents before.

“I can remember only one collision that we were able to confirm was caused by the driver playing Pokemon Go, (who) rear-ended another vehicle,” Johnson told me. “I am assuming there are more, but humans don’t self-report that often when we arrive at scenes to investigate.”

(Hat tip to Seattle-based GeekWire for spotting this story.) 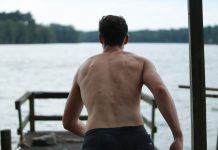