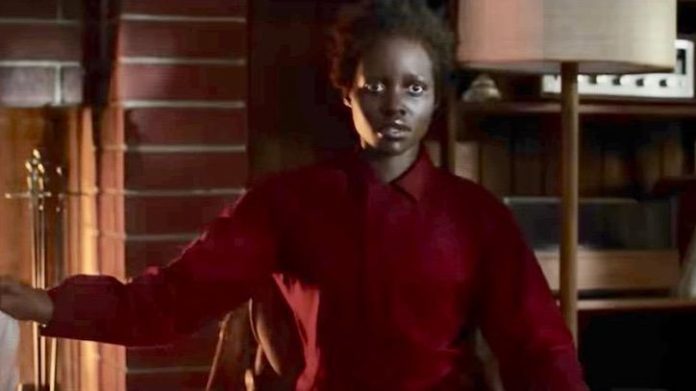 It shouldn’t come as a shocker that a horror film titled Us suggests maybe, just maybe, we are the villains.

At a Q&A Friday following Us’ world premiere at SXSW 2019, the film’s writer, director and producer, Jordan Peele, talked about how much we fear the other without examining ourselves.

“Maybe the monster we need to look at has our face. Maybe the evil is us,” Peele told the audience.

This idea of looking in a mirror is one of the big (read: obvious) theme’s of Peele’s new horror flick.

Us tells the story of Adelaide Wilson, a woman with a traumatic experience in her childhood that casts a dark shadow over a summer beach trip with her family to her old home.

Trauma haunts survivors for years to come like a shadow they can’t shake, and Us puts the members of the Wilson family face-to-face with their own shadows: doppelgangers in red jumpsuits wielding glinting gold scissors. They’re called The Tethered, and they’ve got a score to settle with their better look-alikes.

You could say Us has been hotly anticipated. It follows 2017’s Get Out, a tightly made, critically acclaimed thriller with a social message that earned Peele an Oscar for Best Original Screenplay. It helped set him up as a bright light in the realm of thrills and suspense. In fact, he’s pretty busy these days with projects like the reboot of the Twilight Zone, for which he’s the executive producer and host, and Weird City, a YouTube Original dystopian anthology series.

So it’s hard not to make comparisons to Get Out. But where Get Out was a tidy concept, executed in a way that deliberately and carefully guided you through the story toward the big ideas, Us is bigger, broader and perhaps less neat.

One of the inevitable questions people will ask about Us is whether it’s scarier than Get Out. Peele gets the dread machine going in the first scene at a beach-side amusement park, and the tensest moments include the Wilson family trying to figure out why people outside are trying to get in. And that old horror staple, the ominous Bible verse, will never not be creepy — in this case, Jeremiah 11:11. You can see the uncomprehending terror on Lupita Nyong’o’s face as she stares at her Tethered counterpart, tears streaming down her cheeks.

But while Us shoots for a next level of frightening, it runs into a few weak spots along the way.

For one, we learn the Tethered aren’t just knocking on the Wilsons’ door. But that larger plot is pretty vague.

The effectiveness of the movie’s humor is also tough to gauge. The audience at SXSW was extremely game, laughing uproariously, even in places where it wasn’t entirely clear whether there was a joke to be had — like when the Tethered first show up in the Wilsons’ driveway, and Gabe Wilson (Winston Duke), who’d been dadding it up hard (in the best way) since the start of the movie, goes outside with a bat and some adopted bravado to try and get these mysterious figures to leave. The audience howled.

In a horror film a well-placed quip can cut the tension to not only temporarily relieve the audience but also enable the tension to build back up again. Stick it in the wrong place and the laughs just undercut everything around it.

Throughout the film, we’re shown lots of mirrors and reflections, visually reflecting the theme. After all, the Wilsons are seeing themselves like they never have before, though warped.

Similarly, Us mirrors Get Out. It’s more scary fare with social commentary. But the copy’s never quite the same as the original.

Us hits theaters on March 22 in the UK and the US.

Report: Nearly Half of ICOs Failed to Raise Funds Since Start of 2017

RAM It All: Rising Costs Are Turning EOS Into a Crypto Coder’s Nightmare