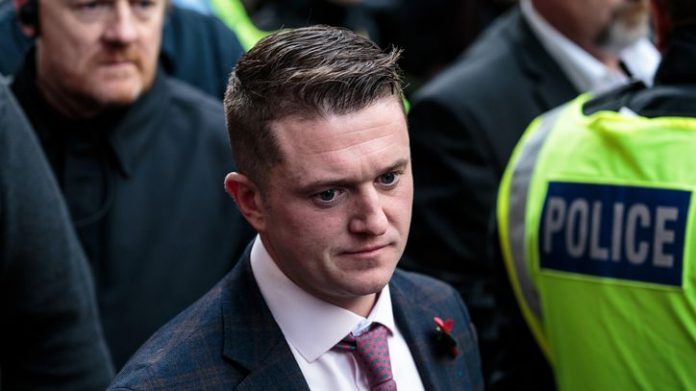 Jacob Wohl, an internet hoaxer and conservative conspiracy theorist, was banned from Twitter for setting up fake accounts, according to the company. Wohl, a supporter of President Donald Trump, has used the platform to spread falsehoods about people, including special counsel Robert Mueller, Supreme Court Justice Ruth Bader Ginsberg and Rep. Ilhan Omar.

In a Tuesday morning USA Today article, Wohl said he planned to create several fake Facebook and Twitter accounts to “steer the left-wing votes in the primaries to what we feel are weaker candidates compared with Trump.”

Tommy Robinson, founder of the far-right English Defence League, was banned from Facebook and Instagram for breaking hate speech rules. Facebook said in a Tuesday blog post that people and organizations involved in “organized hate” — or who support it — aren’t allowed on the platform.

“Tommy Robinson’s Facebook Page has repeatedly broken these standards, posting material that uses dehumanizing language and calls for violence targeted at Muslims,” Facebook wrote. “He has also behaved in ways that violate our policies around organized hate.”

Social media sites have been grappling with hate speech and misinformation on their platforms. Last year, conspiracy theorist Alex Jones was kicked off Twitter, Facebook and YouTube, among other platforms. In October, Facebook banned pages linked to far-right extremists the Proud Boys, and said in 2017 that it removes about 66,000 posts a week because of hateful rhetoric. Trump and some conservatives have raised concerns about perceived bias from social media and tech companies against right-wing figures and groups.