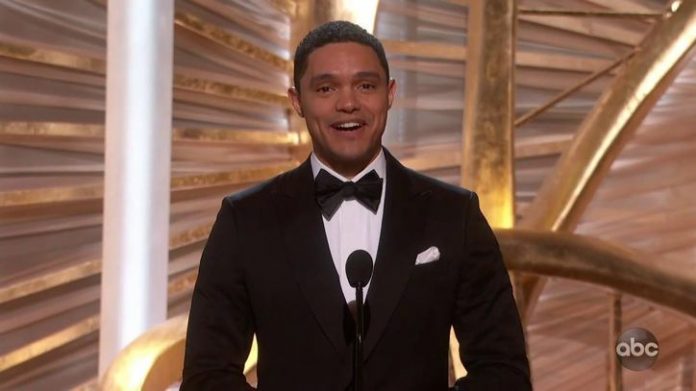 But the award for best Black Panther joke should have gone to The Daily Show host Trevor Noah, an Academy Awards presenter.

When the South African-born comedian presented best-picture nominee Black Panther, he joked that Wakanda and King T’Challa (played by Chadwick Boseman) were real and cherished part of his own childhood memories.

“Growing up as a young boy in Wakanda, I would see T’Challa flying over our village, and he would remind me of a great Xhosa phrase ‘abelungu abazi uba ndiyaxoka,'” Noah said. “Which means, ‘In times like these, we are stronger when we fight together than when we try to fight apart.'”

But those who speak the South African language of Xhosa know that what Noah actually said was “white people don’t know I’m lying.”

Black Panther is special to Noah on yet another level. The comedian has a cameo in the Marvel movie as the voice of the character Griot.

Griot is the artificial-intelligence system designed by Shuri for the virtual plane that guides character Everett K. Ross (Martin Freeman) during an epic battle scene in the film.

“Griot” is also the West African word for storyteller.