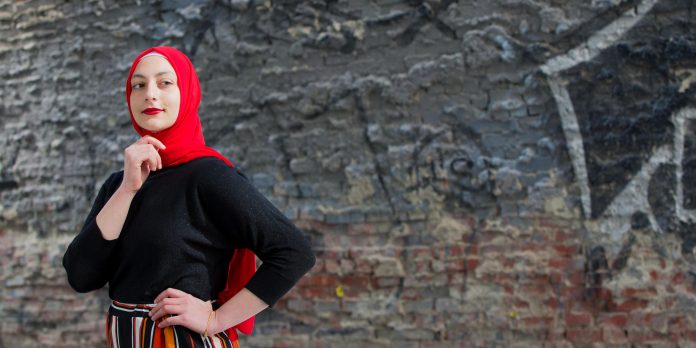 Along the bottom of the fabric, the word “FEMINIST” is scrawled repeatedly in giant black letters. Delicate pink and orange flowers surround the block of text, as if to counteract the word’s power.

As a 25-year-old Muslim woman who loves fashion and wears the hijab, or headscarf, I’ve seen plenty of head coverings. But never anything like this. It’s a statement of resistance, a rebuttal of the idea that Muslim women are weak and oppressed.

And I never thought I’d see it here, at the de Young Museum in San Francisco, let alone any major museum outside the Middle East. The scarf is displayed among nearly 80 outfits in the Contemporary Muslim Fashions exhibit, which, according to the exhibit description, “examines how Muslim women — those who cover their heads and those who do not — have become arbiters of style within and beyond their communities.”

The outfits range from haute couture to streetwear and burkinis, or modest swimsuits. One ensemble, by Dubai fashion brand Pose/Arazzi, catches my eye. It features a long black dress with a full-body image of a teal skeleton across the front, topped with a black jacket resembling a ribcage.

The display wouldn’t be here if it weren’t for social media, says curator Laura Camerlengo.

Instagram, Pinterest and YouTube have pushed modest fashion — a term used to describe less-revealing clothing — into mainstream consciousness. It’s a market looking to reap the benefits of Muslims’ spending power on clothing, which is expected to increase from $270 billion in 2017 to $361 billion by 2023, according to the State of the Global Islamic Economy.

“Muslim modest fashionistas have been among the early users of all different social media platforms and blogs since the turn of the 21st century,” Camerlengo says.

Influencers like Summer Albarcha, Amena Khan and Maria Alia have racked up hundreds of thousands of followers online, becoming go-to sources for hijab-styling tutorials, layering tips and modest-fashion inspiration. These women have used their blogs and social media accounts to share their favorite outfits and makeup routines and, in Khan’s case, to promote her hijab and clothing line Pearl Daisy. Social media has become an open platform for these women to show that dressing modestly can be fashionable.

“I’d always felt that I was the only one who looked the way I did,” says Albarcha, who’s 23 and lives in New Jersey. “But when I saw this whole world of people online, I was like ‘Wow, there are people who are interested in styling their scarves and wearing modest clothing in a fashionable way, just like me.’ I had no idea there was such a wide community out there.”

That sense of community has made wearing the hijab much easier for me, too. Gleaning style inspiration from girls on Instagram and YouTube helped transform a routine experience that often made me feel isolated, like an outsider, into something more enjoyable.

When I first started wearing the hijab in 2006, I was practically on my own when it came to figuring out what to wear. There was no Instagram. I couldn’t open up Teen Vogue and find a spread with the hottest new hijab trends. Now, it’s a whole different story. I can scroll through hundreds of jaw-dropping images from women all over the world, click on links to buy what they’re wearing and learn new hijab-styling tips.

I’m not the only one drawn to that online community. Platforms across the board have seen a rise in activity related to modest fashion. YouTube, a go-to site for hijab-styling tutorials, says uploads of videos related to “hijab” and “tutorial” grew by 57 percent last year. In addition, uploads of videos with “modest fashion” in the title or description nearly doubled year-over-year.

On Instagram, the hashtags #hijab, #hijabstyle, #modestfashion, #modest and #representationmatters collectively increased by 37 percent from September to November, the company says. And on Pinterest, searches for “modest fashion” rose 500 percent last year in the UK.

“Social media has taken communication to a whole new level,” says Alia Khan, founder and chairwoman of the Islamic Fashion and Design Council, which works to help mainstream designers and retailers understand Muslim consumers. “[Modest fashion] isn’t new. What is new is this advent of influencers and social media users who share their lifestyles with their friends and followers.”

In the last three years, mainstream brands from H&M and Uniqlo to high-end labels like MaxMara have launched their own modest-clothing collections. In 2016, Dolce and Gabbana debuted a line of hijabs and abayas, or loose, robe-like dresses worn by some Muslim women. And in 2017, Nike announced its Pro Hijab along with an ad campaign featuring fencer Ibtihaj Muhammad and boxer Zeina Nassar.

Modest clothing has also made its way to high-profile runways for brands like Yeezy and Sherri Hill, as well as to the pages of fashion magazines like Allure, British Vogue and CR Fashion Book.

“When I was growing up, I could never flip through a magazine and see anybody wearing a hijab or somebody that I could relate to.”

That’s Halima Aden, a 21-year-old Somali-American model — and former refugee — who has captivated the international modeling world. In 2017, she became the first hijab-wearing woman signed by IMG Models. Aden has leveraged Instagram to share her experience representing major brands like American Eagle and Tiffany with her more than 800,000 followers. She says things have changed dramatically.

“Even five years ago, I couldn’t log on to YouTube and find a hijab tutorial,” Aden says. “Today, it’s all over the place. I’ll see it all over my [Instagram] timeline.”

That’s not to say there aren’t issues. Mainstream adoption of modest fashion has led to some pushback from bloggers like Hoda Katebi, who runs the political fashion blog JooJoo Azad. She’s critical of how companies like H&M and Nike use hijab-wearing models in their advertising while exploiting Muslim women in sweatshops abroad.

Katebi has also criticized companies like Dolce & Gabbana for running ads featuring non-Muslim women in hijab, without understanding the struggles of women who actually cover every day.

“It really feeds into this idea that Muslim women are nothing more than a piece of cloth, that we can just be used to tap into our dollars because [the models are] wearing a headscarf,” Katebi says.

Many mainstream companies have turned to Muslim influencers to promote their products and campaigns. In 2017, Net-a-Porter teamed up with American-Kuwaiti fashion blogger Ascia Al-Faraj to spread the word about its first Middle East campaign. Companies like Ann Taylor and Banana Republic launched partnerships with blogger Leena Asad to promote their modest clothing options, and influencer Hajra Tariq appeared in an ad for Uniqlo last year.

In 2015, H&M made headlines after featuring a hijab-wearing model, Mariah Idrissi, in one of its ads for the first time. Idrissi, who is from the UK, shared photos from the shoot on her Instagram to promote the company’s “Close the Loop” campaign, which encourages customers to recycle old clothing.

Many companies are cluing in to the fact that there’s a huge market they’ve been neglecting, says Liz Bucar, associate professor of philosophy and religion at Northeastern University. That extends beyond Muslim consumers.

“Beautiful design is beautiful design,” says Holly Frey, who visited the de Young exhibit in October. “It stops being about, ‘Oh these are designs for Muslim people,’ and it just [becomes], ‘Wow, look at that dress.”http://www.cnet.com/”

But for those looking to lure Muslim consumers, not having Muslim women or people who are familiar with Islam in a production room can lead to problems, says Sylvia Chan-Malik, associate professor of American and women’s and gender studies at Rutgers University. She points to an ad by Israeli apparel company Hoodies from last year in which model Bar Refaeli appears to equate taking off the niqab — a face covering worn by some Muslim women — with freedom. The ad didn’t sit well with some Muslim women, who feel that wearing a niqab does not necessarily diminish their autonomy.

That’s not to discount the progress that’s been made regarding inclusion and representation, particularly when it comes to Muslim-owned companies like Haute Hijab and Verona, a hijab and clothing line that Macy’s began carrying last year.

“There’s no denying that it’s meaningful, and it’s moving and it touches people’s hearts to see these representations,” Chan-Malik says. “We can acknowledge that this is exciting. Muslim women are being represented. We can also acknowledge that we can continue to interrogate what that excitement is made of as we move forward.”

Contemporary Muslim Fashions was a perfect demonstration that modesty and beauty are not mutually exclusive. When I visited the exhibit in the fall, I felt a sense of pride as I walked past jaw-droppingly beautiful clothing designed and worn by Muslim women.

A few visitors even came up to me to compliment my bejeweled black suede boots, ask how to pronounce “hijab” and request I translate a line of Arabic calligraphy (I failed). In a sense, I felt like a modest-fashion ambassador.

“Modest fashion is not a fad,” says Muhammad, whose pieces were displayed at the exhibit. “It’s a market that’s going to be around for quite some time.”

Fashion, after all, may be just what we need to bring people together and help them better understand Islam and its followers, says Khan, head of the Islamic Fashion and Design Council.

“Everybody loves beauty,” Khan says. “It reminds me of a saying we have in our belief: ‘God loves beauty, and therefore we, too, should embrace beauty.”http://www.cnet.com/”

The Contemporary Muslim Fashions exhibit wrapped up at the de Young Museum in January, and will run from April 4 to Sept. 15 at the Museum Angewandte Kunst in Frankfurt, Germany.

Ric Ocasek dead at 75: The Cars lead singer remembered as gift to new...