Apple co-founder Steve Jobs died in 2011 at age 56, eight years after being diagnosed with pancreatic cancer. But a recent photo of a Jobs look-alike, apparently taken in Egypt, started fans buzzing.

The photo was shared over the weekend on Reddit by numerous users. The earliest use of the image I could find dates to Saturday, when Facebook user Ahmed Basyouney shared it there. Basyouney didn’t immediately respond to questions about whether he was the original photographer.

No question, the image looks a lot like the late computer mogul. He’s even barefoot, as Jobs often was.

But just in case anyone was tempted to jump on the conspiracy bandwagon claiming Steve-Jobs-is-alive-just-like-Elvis, check the man’s wrist.

Social media was all about sharing the look-alike’s photo. One Twitter user captioned a photo of the real billionaire as “Steve Jobs,” and marked the photo of the barefoot look-alike, “Steve No Job.”

And of course, the constant conspiracy theory that the late singer Elvis Presley isn’t dead either was mentioned. “THE FAT GUY NEXT TO HIM IS ELVIS,” said one Twitter user.

Some people had other angles on Jobs’ apparent twin. “If Steve Jobs were really alive, I doubt that he would be keeping quiet about the rumored ceramic casing of the upcoming Apple Watch,” wrote one Twitter user.

Whoever the unknown man is, one Reddit user has a great career opportunity idea for him.

“Apple should hire this guy, bring him to USA and start a campaign that the Jobs is back from the dead,” wrote the user going by Jonesderserder. “iMalive. And he could fix the keyboards in Macbooks.” 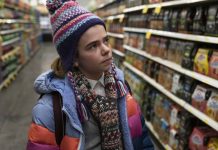 Review: Station Eleven’s HBO adaptation got here at a bizarre, however...