Star Wars: The Mandalorian is set to be the first Disney Plus original series to debut, and it’s a prime feature of the D23 Expo this weekend. The series stars Pedro Pascal as the titular Mandalorian and was written by Jon Favreau. New details and footage were revealed Friday ahead of the Nov. 12 launch, and Disney teased us with a poster earlier in the day.

Today Favreau came on stage to give fans a first look.

Whether you like the original or the prequels, “we’ve got something for everyone,” he said.

Favreau previously revealed that the series would be set seven years after Return of the Jedi (so 23 years before The Force Awakens).

Speaking at Star Wars Celebration back in April, Pascal gave the lowdown on his gray-area bounty hunter.

“He’s got a lot of Clint Eastwood in him,” the actor said, adding that he watched Sergio Leone and Akira Kurosawa movies to prepare.

“He’s kinda the head of this guild of bounty hunters,” Weathers said of his character during Star Wars Celebration, according to CNET’s Sean Keane. “The Mando is a guy who he figures can get the job done.”

The reaction to the new trailer was almost unanimously positive.

And that reaction is understandable. The afore-mentioned Spaghetti Western tone is evident even in the trailer, and when you close with Werner Herzog in full Grizzly Man voiceover mode, it’s hard to hold back the shivers. If this trailer is anything to go by, we could be in for something pretty cool with The Mandalorian. 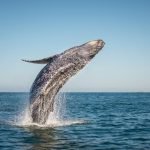 Kya Gin (Rex) Wong - October 11, 2018
0
Bitcoin Whales are Stabilizing the Market, Not Crashing it: Research New data from Chainalysis has revealed that bitcoin whales are a surprisingly heterogeneous group of coin...