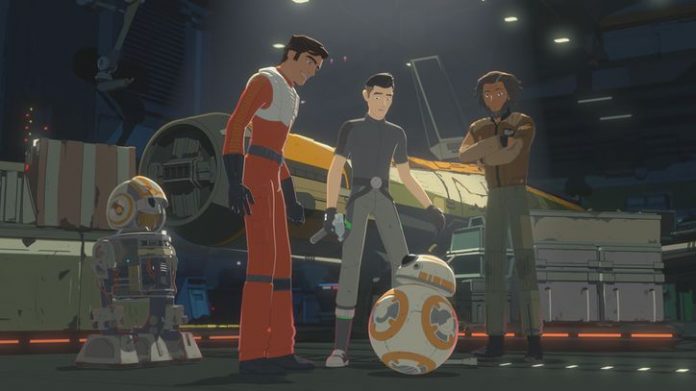 Well, that was pretty cool.

We’re up to episode 17 of the CGI animated series Star Wars Resistance, which takes place a day before The Force Awakens.

Kaz fills Poe in on his theory — based on the intel he discovered — that the totalitarian First Order is taking over the platform so the Resistance can’t use it when they go to war. He points out a sector where their enemy has been engaged in some mysterious activity, and Poe decides they’ve got to check it out.

Starkiller Base is a solar vampire

After a wild escape from the First Order-occupied Colossus, Poe and Kaz jump to a sector of the Unknown Regions (where the First Order has been quietly amassing its forces for years).

They discover that the system’s sun has disappeared and the energy sucked from the various planets’ cores. We know that this is from the First Order’s Starkiller Base superweapon powering its main weapon, but Poe and Kaz don’t — yet.

Soon, that weapon will wipe out Hosnian Prime — the seat of government for the New Republic and Kaz’s homeworld — as the First Order takes over the galaxy.

In a really cool sequence, Poe and Kaz fly through a cored-out planet (and barely escape a gravity well), then investigate a settlement on a intact moon. With the system’s sun gone, it’s freezing cold.

They find a temple scored by blaster fire — presumably the natives tried to take shelter here as the First Order wiped them out. The militaristic group wouldn’t want anyone warning the New Republic about its dastardly deeds — could this be what happened to the orphans on the Colossus?

The probe droid it left to take out anyone who happened upon the devastation is like a fancier version of the Imperial one seen in The Empire Strikes Back, and it releases little droids that resemble the training remote Luke Skywalker uses in A New Hope, but the Resistance pair manage to destroy it.

Poe and Kaz end up having to flee from some First Order pilots led by Major Vonreg (Lex Lang) in his super cool red TIE Interceptor. They use the gravity well to wipe out their pursuers, but Vonreg clearly survives.

BB-8’s back with his master

We knew it was coming, but Kaz didn’t. With the events of The Force Awakens so close, BB-8 had to return to Poe after sticking with the spy since the premiere. At least he’s pretty awesome in his last mission with Kaz, proving essential in taking out the probe droid.

In exchange, Poe leaves CB-23 — a droid we’ve met before — to help Kaz. Will she prove as capable as BB-8 though?

Tam’s sick of being kept out of the loop

Something’s gotta give, and it’s likely that they’ll end up joining with Resistance before the season is over. Regardless, the events of The Force Awakens will presumably happen in the next episode — The Disappeared — so the stakes are about to get very high, very fast.

Apple won’t listen to Siri recordings without your permission anymore

No Harry Styles? No worries. Here’s who should play Prince Eric in The Little Mermaid