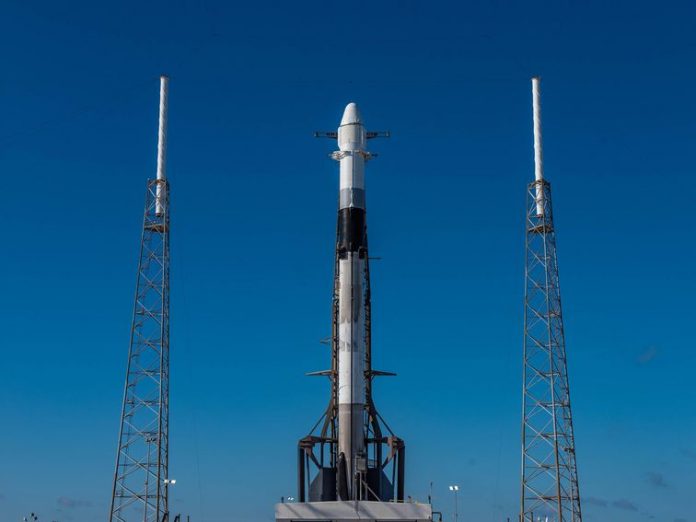 SpaceX has officially become an old pro at sending cargo to the International Space Station. It added to its resume of successful Dragon spacecraft journeys Thursday with CRS-18, its 18th commercial resupply mission. Dragon was scheduled to launch on Wednesday, but bad weather delayed the attempt until Thursday afternoon.

SpaceX successfully recovered the Falcon 9 first stage with a ground landing at Cape Canaveral — a signature move by the company, which hopes to lower rocket costs by reusing components. The Dragon is now in a good orbit, with solar panels deployed, and is scheduled to dock with the space station on Saturday.

The CRS-18 Dragon spacecraft looks a little different than previous ones. It launched sporting an Apollo 50th anniversary logo near the side hatch to commemorate the 1969 moon landing.

This particular Dragon capsule has already traveled to the ISS twice, so it has two space station logos on the other side of the hatch.

Dragon is also outfitted with four ceramic heat shield tiles that are being tested for use on the Starship, SpaceX’s next-gen spacecraft now under development.

The cargo mission is stuffed full of gear, supplies and experiments. Notably, it carries the International Docking Adapter-3, which will attach to the ISS to allow future NASA Commercial Crew Program spacecraft to dock autonomously. SpaceX and its Crew Dragon vehicle is part of that program, which aims to once again launch astronauts to space from US soil.

Dragon will spend about four weeks docked to the ISS before returning to Earth. SpaceX is contracted to resupply the space station through 2024. The CRS-18 mission may be business as usual, but a rocket launch is always a majestic sight.