SpaceX’s workhorse rocket, the Falcon 9, has had a pretty successful year of launches. With seven flights and seven successful landings under its belt, SpaceX is gearing up for Number 8 with the AMOS-17 mission. SpaceX confirmed Wednesday that the static fire test of the Falcon 9 was complete and data was being assessed, setting the launch for Saturday, Aug. 3.

However, that date now appears to be in jeopardy, after Elon Musk’s spaceflight company announced it would perform a second static fire test after replacing a “suspect valve”. An updated launch date was not provided.

SpaceX did not immediately respond to a request for comment.

While a successful static fire test isn’t considered a huge milestone anymore, it’s particularly important in this case because the customer, Spacecom, previously lost a satellite payload on a SpaceX flight in 2016. As a result, this launch will be provided to Spacecom free of charge, after that anomaly during the static fire testing resulted in an explosion of the launch vehicle and Spacecom’s AMOS-6 satellite.

The new satellite, known as AMOS-17, will provide telecommunications access across the Middle East, Africa and Europe and will eventually finish up in a geostationary orbit around the Earth.

The booster being used has flown twice previously, in July and November 2018 but will not be recycled like its previous two flights. Instead, it’s likely to end up in the ocean.

Elon Musk’s spaceflight company routinely provides a livestream of its launch and payload delivery at the SpaceX website. We’ll update this post when the livestream is available. In the meantime, it’s worth watching this epic Falcon booster re-entry that the SpaceX CEO posted on Sunday. 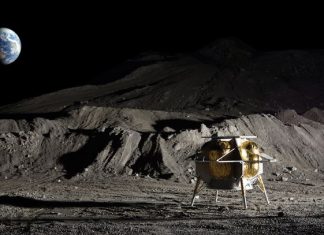