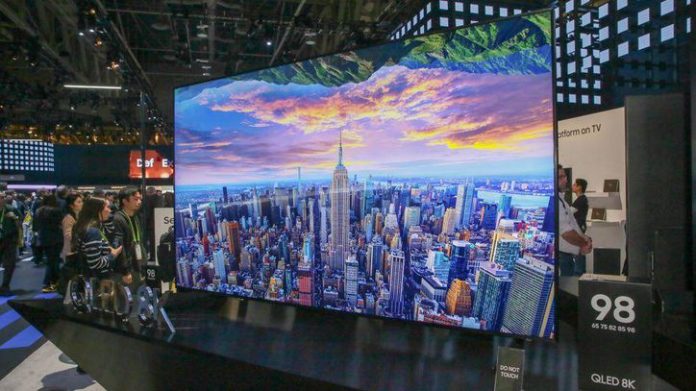 Samsung sells more TVs worldwide and in the US than any other brand, a position it has held for more than a decade. And it doesn’t look like 2019 will be any different.

Today the TV behemoth unveiled its full lineup for 2019, more than a month earlier than it has in the last few years. And more than ever before the televisions themselves are behemoths. Of the 41 new models, seven are 75-inch versions and eight measure 80 inches or larger — including an insane 98-inch 8K TV announced at CES.

TVs 65-inches and bigger have been growing in popularity every year since 2016 as prices on big TVs continue to fall and shoppers replace their main TVs with something bigger. Samsung cites IHS Markit, saying the market for 75-inch or bigger TVs is expected to grow by 43% in 2019, to 3 million units, and expand to 5.8 million units by 2022.

Another big reason for Samsung to push big TVs? Its main rival among high-end models, LG’s OLED televisions, top out at 65 inches. Sure you can get a 77-inch OLED TV for $7000, but Samsung’s 75-inch QLED sets typically cost half that much or less.

Here’s a summary of all of the 2019 TVs Samsung announced.

The majority feature Samsung’s QLED technology — not to be confused with OLED. It’s a variation of LCD that uses quantum dots to improve brightness, color and other aspects of image quality. In CNET’s tests previous Samsung QLED TVs have performed very well, especially when paired with full-array local dimming backlights. But even best QLED TV of 2018, the Q9, cost a couple can’t beat OLED image quality of LG’s cheapest OLED despite costing more.

Although most of the new models will be available for pre-order at Samsung’s site soon, pricing for most of them isn’t currently available for most models. One exception is the 8K resolution Q900R, which was announced earlier and starts at $5,000 for the 65-inch size. That’s ridiculously expensive and definitely not considering unless you just have money to burn.

Among mainstream models the only ones with pricing at press time are the 55- and 65-inch Q60R, for $1,200 and $1,800 respectively. We’ve asked Samsung for additional prices and will update this article if we hear back.

Samsung previously announced the newest versions of The Frame and The Serif, two design-conscious series that strive to imitate a painting on a wall (The Frame) and modern art (The Serif).

The rest of the models are all-new, more mainstream and sure to comprise the ones TV buyers will be most interested in this year. Here’s some takeaways from Samsung’s announcement.

Better viewing angles. The Q90R and Q80R have a new Ultra Viewing Angle panel technology that addresses one of LCD/QLED’s  biggest weaknesses compared to OLED: a tendency to fade and wash out when viewed from seats to either side of the sweet spot directly in front of the TV. I saw a  demo of the new tech at CES and it did improve upon the Q9’s (already impressive for an LCD) viewing angle, so I pextect good things from the 2019 sets in this area.

More full-array dimming. The best technology for improving LCD image quality is full-array local dimming, and in 2019 it trickles down to an additional, potentially less-expensive series, the Q70R (as well as the more expensive 2019 sets). I don’t expect the Q70R to rival the value of Vizio or TCL’s 2019 FALD TVs, but another option for midrange TV shoppers is always a good thing.

Apple iTunes built-in. As announced at CES, Samsung’s TVs will have an app for Apple’s iTunes TV shows and movies — an exclusive among smart TV makers, and formerly restricted to Apple TV. It will be available on all 2019 Samsung smart TVs, as well as 2018 models with a firmware update. Samsung and other TV makers will also work with Apple’s AirPlay 2 system for controlling music and video via iPhones, iPads and Mac computers.

The best 3D printers in 2019 for beginners and budget creators