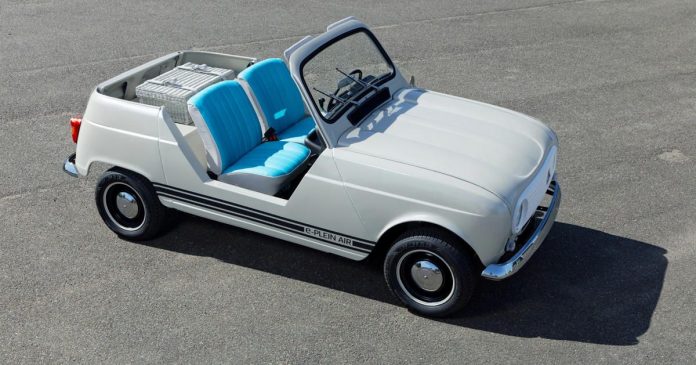 It’s always nice to see an automaker giving an old car a breath of 21st-century air. For the 10th anniversary of 4L International, a festival dedicated to Renault’s first front-wheel-drive family car, the French OEM borrowed from its current stable to create a very interesting one-off.

Renault this week unveiled the e-Plein Air, an electric take on the automaker’s doorless, open-top runabout. The e-Plein Air is the creation of Renault Classic, Renault Design and Melun Rétro Passion, which sells parts and accessories for older vehicles. The result is something that looks just as beach-ready as the day it debuted.

The automaker didn’t give out too many details, but it did say that the e-Plein Air borrows its EV underpinnings from the Renault Twizy two-seater. Its 6.1-kWh battery only offers about 62 miles of range in the Twizy. Since we’re unsure how close the e-Plein Air comes to the Twizy’s 992-pound curb weight, it’s unclear if this concept will get better or worse mileage than the quadricycle.

Nevertheless, it’s a sharp little thing. The exterior isn’t exactly the same as the usual Plein Air variant of 4L; there’s some new livery along the lower body panels, and there’s a much more modern grille up front. The interior gets a new set of seats, a cute little picnic basket in the back and a digital display that lets the driver monitor not only speed, but battery capacity, too.

While I can’t imagine that Renault would actually craft a small-batch run of these diminutive beach-combing EVs, I suppose there’s nothing stopping a Plein Air owner from going out, buying a Twizy and hacking together their own custom electric creation.

Colman Ma - October 3, 2018
0
First in Cryptocurrency History: 9 Top Exchanges Listing Alibabacoin at the Same Time This is a paid-for submitted press release. CCN does not endorse, nor is...

The Best Home Security Cameras of 2019