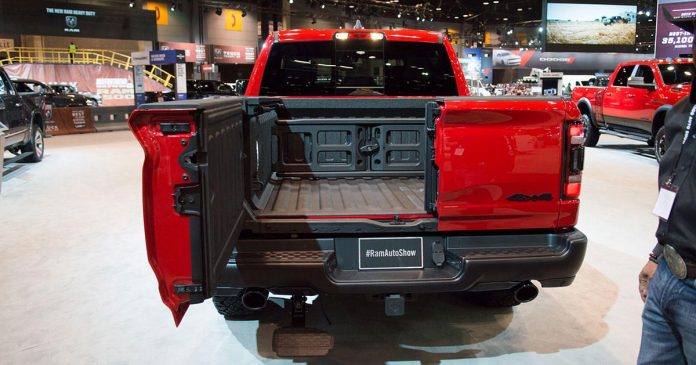 GMC shook the light-duty pickup segment when it debuted the MultiPro Tailgate, which was a tailgate within a tailgate that offered some extra versatility to a longstanding part. Now, Ram has its own trick solution.

Ram on Tuesday unveiled the Multifunction Tailgate. It’s a regular tailgate, capable of moving up and down with dampers that slow down the movement, and it can also drop with a push of the key fob. But it’s unique in that the tailgate also has a 60-40 split, like a passenger car’s rear seat, letting each side of the tailgate open like French doors. Each door opens 88 degrees, nearly parallel with the fenders.

Ram claims that this new set of hinges will make things much easier for owners. Only one side needs to be opened for curbside access, and getting closer to the bed when loading is easier than trying to reach over a tailgate. Ram also says it’ll improve forklift loading, for the real workhorses out there. There’s also an optional center step for improved access.

The automaker also pointed out that the Multifunction Tailgate is trailer-friendly, being able to open and close without removing the trailer and hitch. Ram said this is “unlike other multi-element tailgates,” but I have not attempted to haul a trailer with a new GMC Sierra, the only other truck with a trick tailgate like this, so I can’t speak to that assertion. personally.

Ram’s Multifunction Tailgate will be available on all seven 2019 Ram 1500 variants. Reaching dealerships in the second quarter of this year, the Multifunction Tailgate will add $995 to the truck’s bottom line. The optional center step is an extra $295 on top of that. But you can see it a little early if you’ll happen to be at the Chicago Auto Show, since it’ll be there. Public days kick off on Saturday.

Save on prime tech with 15% off refurbished gadgets at Decluttr