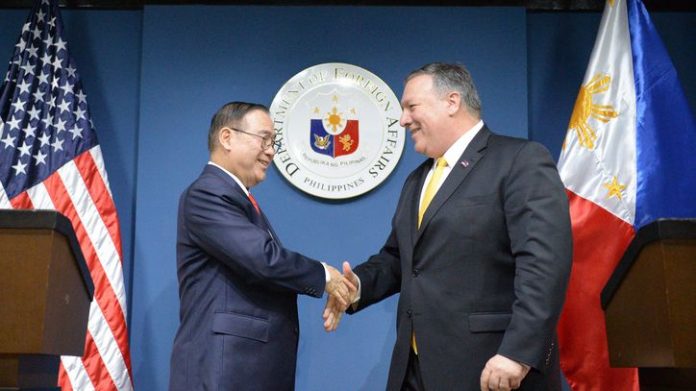 US Secretary of State Mike Pompeo on Friday warned there could be issues for American companies operating in countries that are using 5G gear from Chinese telecom equipment maker Huawei.

Pompeo made the comments during a press conference in Manila where he reiterated security concerns the US has with network operators using Huawei gear to build the next generation of wireless networks. He said the world should keep its “eyes wide open” regarding the security risks, according to a report from Reuters.

“Our task has been to share with the world the risks associated with that technology: the risks to the Philippine people, the risk to Philippine security, the risk that America may not be able to operate in certain environments if there is Huawei technology adjacent to that,” he said during a news conference according to Reuters.

He continued, “We want to make sure that the world has their eyes wide open as to the risks of having that technology to be part of infrastructure, backbone or networks.”

The statement comes as the US government continues to pressure other nations to ban Huawei and other Chinese telecom giants from providing gear used to build 5G wireless networks. 5G is the next generation of cellular technology, which promises download speeds that are 10 to 100 times faster than today’s 4G LTE networks. It will also improve network latency, ensuring the network responds almost instantaneously.

Security experts in the US have accused Huwawei of sharing information with the Chinese government. The company denies this allegation.

Several countries have already banned the use of Huawei’s networking equipment. Earlier this year, the US government discouraged European countries from using Huawei’s 5G technology. Last week, Pompeo increased the pressure on allies by stating the US will not partner with countries that adopt Huawei’s technology.

“If a country adopts this and puts it in some of their critical information systems, we won’t be able to share information with them,” Pompeo said during an interview with Fox Business. “In some cases there’s risk — we won’t even be able to co-locate American resources, an American embassy, an American military outpost.”

Huawei has consistently denied claims that it poses any security risk. In an opinion piece published in the Financial Times on Wednesday, Huawei’s rotating chairman Guo Ping said the US campaign to get Huawei gear banned worldwide is because US equipment makers lag Chinese manufacturers in 5G technology development.

“The fusillade being directed at Huawei is the direct result of Washington’s realisation that the US has fallen behind in developing a strategically important technology,” he wrote. “The global campaign against Huawei has little to do with security, and everything to do with America’s desire to suppress a rising technological competitor.”

Is a ban really the best idea?

At least one American technology expert warns that Pompeo’s calls for banning Huawei may do more harm than good. Francis Dinha, CEO of the security software company OpenVPN, agrees that Huawei and other companies based in China cannot be trusted to secure 5G networks.

But he said those concerns can be mitigated. He said network security can and should be layered on top of any network to ensure end-to-end security. He said this is important regardless of who makes the equipment deployed in a network.

“Operators need to be smarter about how they deploy technology and not assume any company’s gear is secure,” he said.

Still, he acknowledged that Huawei’s gear raises “red flags” that may pose additional risks given the relationship that Chinese companies inherently have with their government. He said it’s smart to be skeptical of Huawei’s claims that its gear is secure. But he warned an outright ban could harm US companies looking to catch up technologically to Chinese manufacturers, which currently lead in advanced 5G technology development.

“From a technology point of view, it’s not a smart decision to ban any competitor from a market,” he said. “Eliminating competition can make companies complacent.”

He said that competition is needed to drive innovation. He also added that without access to the Chinese technology, American and other western companies will be less aware of the advancements in 5G, which could lead them to fall even further behind technologically.

We Drove the World’s Fastest SUV, the Lamborthini Urus, Through The Mojave Desert