OnePlus sought ideas for the name of its smart TV from fans shortly after revealing its plans enter that market last September, and it just announced its decision in its forum: OnePlus TV. Along with this simple “yet to-the-point” name, the Chinese company opted for a straightforward logo, by adding “TV” to its standard symbol.

“We believe there’s no other name that can best represent our value, vision and pride than naming it with our own brand,” a spokesperson wrote.

The post didn’t hint at a OnePlus TV’s release date, but The Next Web reported it’ll launch in September. OnePlus didn’t immediately respond to a request for further comment.

Earlier this month, MySmartPrice highlighted a Bluetooth SIG listing that refers to OnePlus’ offering as a “unique Android TV” that uses LED displays rather than OLED, along with hints that they’ll range in size from 43 to 75 inches. 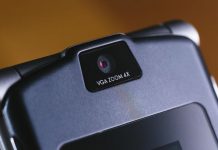 Forget the Galaxy Fold and Mate X, the Motorola Razr is...