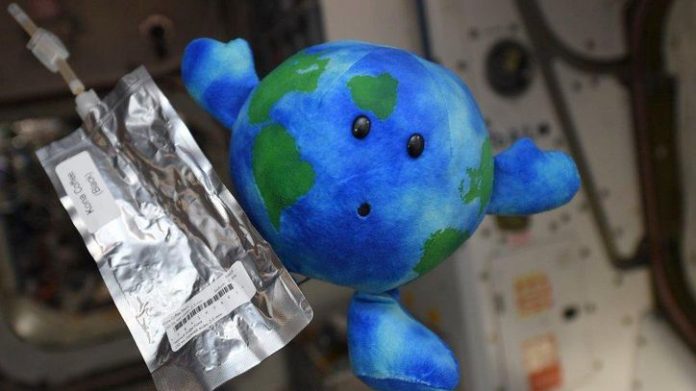 NASA astronaut Anne McClain on the International Space Station has adopted a plushie anthropomorphic Earth toy as the newest member of the crew. The little planet is now a social media star.

There’s a long history of astronauts and cosmonauts taking small toys along on launches. When the toy floats, it indicates the spacecraft has reached microgravity. That was little Earth’s job initially, but now it’s getting the full ISS experience thanks to McClain.

McClain posed with the Earth toy after entering the Crew Dragon capsule on Sunday after the capsule successfully docked with the station. She then took it aboard the ISS to look at its home planet. “Yes, buddy, that’s your Mother Earth. Isn’t she beautiful?” McClain tweeted.

The adventures continued as Earth hung out with the astronaut while she checked her spacesuit sizing. McClain is now two inches taller than when she first arrived at the ISS, a common phenomenon for astronauts when away from Earth’s gravity.

The endearing toy comes from Celestial Buddies, which makes plush planets. The company was taken by surprise when the toy went to space, saying, “a sudden flurry of orders for Earth in the 48 hours prior to liftoff had made us wonder if something was afoot.”

The little Earths are now on back order. Celestial Buddies expects a new batch to arrive at the end of April.

Earth’s tour of the space station continued with some morning coffee in a bag. It then got to try on an emergency mask along with Canadian Space Agency astronaut David Saint-Jacques. The mask practice is in case of an ammonia leak, which would give the crew mere seconds to don the masks to protect themselves.

Musk is following Earth’s escapades in space and retweeted one of McClain’s images. “Buddy is like an Earth Pokémon,” the SpaceX founder wrote.

Crew Dragon is spending a total of five days docked at the ISS before returning to Earth for a planned landing in the Atlantic Ocean.

The Demo-1 mission marks a milestone for NASA’s Commercial Crew Program. If the capsule passes this trial, then NASA and SpaceX hope to launch astronauts on Crew Dragon as soon as midyear.

Galaxy Note 10: Samsung has one more chance to impress us this year