The Nintendo Switch Lite is still more than a month away, but there’s one new piece of Nintendo hardware you can get right now. The so-called V2 version of the dockable Switch has quietly made its way into stores, and some people are even trading in their original hardware for the new model.

The difference between the two versions of the modular Switch is a processor upgrade that promises improved battery life (newer processors are often more power efficient than their predecessors). The new V2 battery claim from Nintendo is 4.5 to 9 hours, vs. 2.5 to 6.5 hours for the first-gen hardware.

Both V2 and V1 Switches in hand, I ran a battery test on each. For this comparison, I ran non-stop video via the Switch’s YouTube app, with screen brightness at 100% and auto-brightness and sleep timers turned off. Note that V1 Switch used here has some milage on it, but has been used almost exclusively docked. (What can I say? I’m a docker, not a hander.)

That’s a notable improvement, but is it worth selling or trading in your current Switch for a new one? I’d say its doubtful, especially as you’ll have to transfer game saves from one system to another, a process Nintendo complicates by deleting the data from the original Switch as part of the transfer process.

My colleague Ashley Esqueda did just that, transferring her saves as part of a trade-in right at a retail store. She describes the process (and it’s a bit of a hassle) in great detail in this excellent Twitter thread.

I tried something different, transferring the saved content for a single game from the V1 Switch to the V2. By doing this, both Switch units can use the same account, but your saved game files are deleted from the original Switch when they get transferred to the new one.

It’s also worth keeping track of which one is your primary Switch, which is an important designation Nintendo keeps track of. On your primary device, other user accounts on the same hardware can access your owned content. On a secondary device, only you can.

If you’re convinced the Switch V2 is for you, just don’t go out and accidentally buy some old stock that’s still sitting on a store shelf. The only way I could find to tell the hardware apart is the model number stamped on the back. The original reads “HAC-001,” while V2 is “HAC-001 (-01).”

But there’s also an easier way to tell the difference — the V2 Switch comes in a box with a red background on its front panel. But even if you just bought a V1 Switch, there’s hope, as Nintendo will swap out an original Switch purchased after July 17 for a new V2 model if you contact the company.

Disclosure: The Techy Trends may get a share of revenue from the sale of products featured on this page. 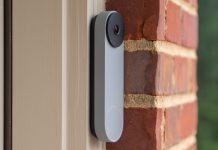