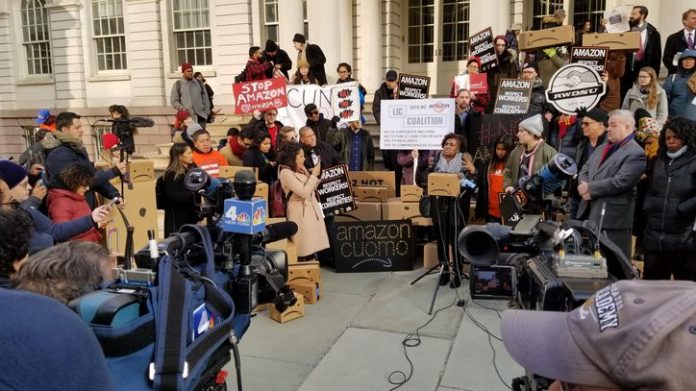 Some powerful New Yorkers are trying to get Amazon to bring back HQ2.

The New York Times reported Thursday that an open letter will be published in the Times on Friday that asks Amazon to reconsider its decision to walk away from its plan to build a 25,000-employee campus in Long Island City, Queens. The company pulled the plug on the project, dubbed HQ2, following vocal and persistent opposition to the plan after it was announced three months ago.

The letter was signed by the CEOs of Mastercard, Warby Parker, Goldman Sachs, Tishman Speyer and Jetblue, among others. The presidents of the Building & Construction Trades Council of Greater New York and state AFL-CIO, which were expecting thousands of construction jobs to come from the project, also signed, as did US Reps. Hakeem Jeffries and Carolyn Maloney.

“We know the public debate that followed the announcement of the Long Island City project was rough and not very welcoming,” the letter stated. “Opinions are strong in New York — sometimes strident. We consider it part of the New York charm! But when we commit to a project as important as this, we figure out how to get it done in a way that works for everyone.”

New York Gov. Andrew Cuomo has also had several conversations with Amazon, including CEO Jeff Bezos, about bringing back the project, the Times said.

The letter and Cuomo’s behind-the-scenes efforts are part of the latest fallout since Amazon abandoned HQ2 in New York. The opposition has celebrated the exit as a victory for grassroots campaigns and a stand against lavish government incentives for new development plans. Amazon was slated to get about $3 billion in tax breaks for building the project. Supporters, who weren’t as vocal during the run-up to Amazon leaving, expressed shock and consternation about Amazon’s decision and worried that New York would appear unfriendly to new businesses.

While the business community was broadly seen as in favor of the project, the letter shows how both the camps supporting and opposing HQ2 included unions and Democratic US congress members. Unlike Jeffries and Maloney, US Rep. Alexandria Ocasio-Cortez spoke against the HQ2 plan.

Amazon declined to comment for this story, but the Times said Thursday that “Amazon executives gave no sense that it would reconsider.”

The company is moving forward with the other half of the HQ2 project, which will be located in Arlington, Virginia. The company also faces public opposition to that project, too, though it appears to be smaller.