Our relationship with speeding and tickets is an odd one: We drive cars that are capable of top speeds that make no sense in the hands of average drivers and in common situations. Managing the temptation to speed is a hallowed cat-and-mouse game between you and the police that is ineffective.

But that game is starting to change as new cars will soon prevent speeding — or at least make you think about it every time.

New cars that keep you from speeding

Volvo will electronically limit top speed to 112 mph in its 2021 and newer cars. That’s not much of a speed limitation (the odd number is derived from the metric 180 kilometers per hour), but it’s a big haircut from the 155 mph that many premium cars are currently limited to, and moves the goalposts from what a car can do to what a car should do.

New cars in the EU are close to having Intelligent Speed Adaptation technology that can prevent speeding at three levels:

You can choose to ignore, push through or cancel the above interventions, respectively, but that puts you in a very different relationship with the act of speeding if something bad happens. The EU seems on track to require the technology on new cars by 2022.

How cars know the speed limit

How can a car know the local speed limit? A combination of camera-based sign recognition, which has been showing up in cars for several years, along with on-board GPS speed limit databases can make a car rather clairvoyant.

Nothing like this is scheduled for the US yet, but there is a new proposal in the US Senate to limit the top speed of big rig trucks to 65 mph using electronic speed governor technology already present in many of them of them but not required to be used.

The bill’s authors cite a DOT study that found such a speed cap could save between 60 and 200 lives a year out of the 1,300 annual fatal crashes involving big rigs on highways.

As you can imagine, truckers aren’t happy about a 65 mph speed limit technology, believing it would create dangerous speed differences between trucks and other traffic, especially on highways with speed limits as high as 80 mph.

What this really makes happen

Perhaps the most interesting thing about speed-limit tech is how it constitutes a quiet onslaught of driver-assist and drive-management technologies. It may do more to usher in comfort with self-driving cars than any announcement by Waymo, Cruise or Zoox. Technologies like active speed limit help build comfort with the idea that cars have their own sets of skills, discipline and expertise. 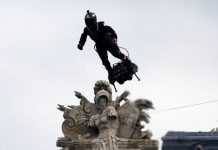 French ‘Green Goblin’ prepares for next attempt to fly from France...