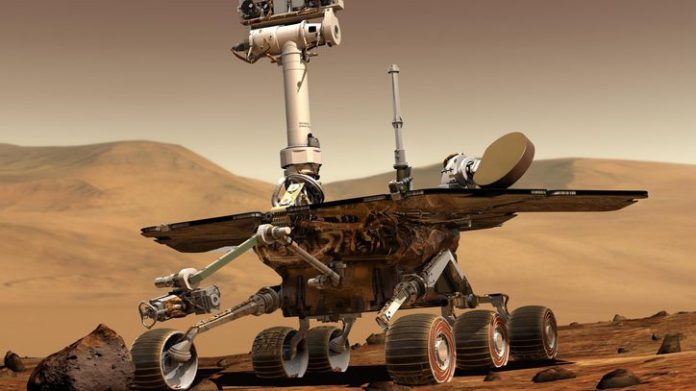 NASA appears to be convening its leadership to deliver a eulogy for its Mars rover, Opportunity.

The space agency has scheduled a briefing Wednesday, when it will announce the results of final attempts to contact the solar-powered robot that’s roamed the Red Planet since 2004.

NASA lost contact with Opportunity during a planet-wide dust storm last June and hope has slowly faded since that the bot will phone home. Because the rover is solar-powered, it would be unable to charge its batteries and operate if its solar panels have been covered by a significant amount of dust.

Opportunity had an initial goal of covering 700 yards (640 meters) and operating for just 90 days on the surface of Mars. It exceeded expectations more than 50-fold by staying operational for over 14 years.

Speculation from the astronomy community online is that NASA won’t be able to raise Opportunity when it makes one last attempt Tuesday night.

“Think we may be saying goodbye to the Opportunity rover,” astrophysicist Gemma Lavender tweeted.

The notion that the briefing is expected to be a sad one rather than a “hey, maybe this little robot has a little longer to rove” one is bolstered by the fact that NASA administrator Jim Bridenstine will be on hand with the Mars Exploration Rover mission leadership and an engineer from the Mars 2020 rover team. I can already hear the parting words about “passing the robotic torch” to the next-generation rover set to launch next year.

Also, this highlight reel from Opportunity’s career quietly appeared online Tuesday with a description that includes an awful lot of talk about the rover in the past tense.

We won’t know for sure what Opportunity’s fate is until 11 a.m. PT Wednesday when NASA broadcasts the briefing live via NASA TV and YouTube (which you can access by clicking the embed below), but it’s not looking good.

We’ll have more on the life, times and (likely) end of Opportunity Wednesday, so check back.

NASA turns 60: The space agency has taken humanity farther than anyone else, and it has plans to go further.

Blinded by the Light: This exuberant Bruce Springsteen musical wouldn’t exist without Brexit

Captain Marvel review: A soaring tale of self-discovery with a ’90s beat