The next-generation James Webb telescope has had a rough time coming into existence, but NASA was able to celebrate a big step forward this week when engineers joined the two halves of the observatory.

The joining took place at a Northrop Grumman facility in Redondo Beach, California. Engineers used a crane to put the telescope together with the other major component, a combined spacecraft and sunshield. Together, they will be part of a mission to explore and image the cosmos, taking over where the Hubble Space Telescope leaves off.

NASA shared several views of the process on Wednesday. The telescope’s shiny mirrors really stand out. The two halves are physically connected and engineers are now working on all the fiddly bits, like making electrical connections.

The Hubble Space Telescope, which launched 29 years ago, is still functioning, but it’s getting old and has faced its share of technical problems. Scientists are looking forward to accessing the data gathered by the more powerful James Webb.

James Webb was originally supposed to launch in 2018, but has been pushed back multiple times while racking up some serious cost overruns. It is now scheduled to go to space in 2021. This latest milestone gives us all hope that NASA might actually meet that deadline. 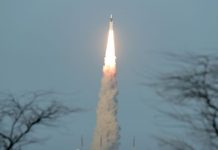