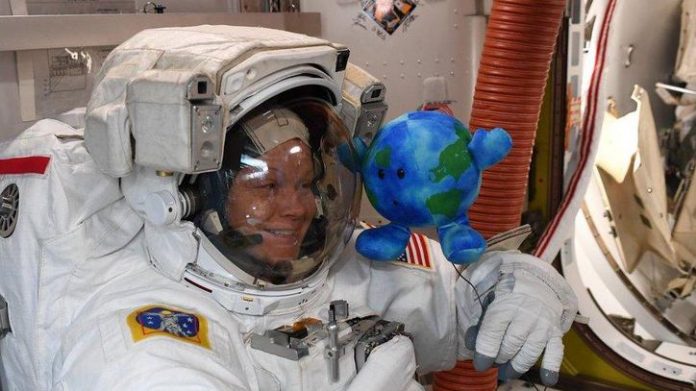 Mark your calendars for March 29 to witness a new landmark in space history. NASA astronauts Anne McClain and Christina Koch are scheduled to suit up and head outside the International Space Station. It will be the first all-female spacewalk.

Canadian Space Agency flight controller Kristen Facciol dropped the news on Twitter, saying she will be on console providing support for the spacewalk.

“Holy smokes, my Twitter exploded with excitement over women doing awesome things in space and I love that,” Facciol later wrote. “But here’s hoping this will be the norm one day!”

Facciol will have some company on the ground. The lead flight director is Mary Lawrence and the lead EVA flight controller is Jackie Kagey.

“It was not orchestrated to be this way; these spacewalks were originally scheduled to take place in the fall,” a NASA spokesperson said. That means it’s a happy coincidence the spacewalk is now set to occur during International Women’s Month.

Cosmonaut Svetlana Savitskaya was the first woman to perform a spacewalk in 1984. Later that year, NASA astronaut Kathryn Dwyer Sullivan became the first American woman to walk in space. All the women spacewalkers so far have conducted their extravehicular activities along with male astronauts or cosmonauts.

McClain is currently on board the ISS. Koch is scheduled to launch for the station March 14 aboard a Roscosmos Soyuz spacecraft along with NASA astronaut Nick Hague and cosmonaut Alexey Ovchinin.

McClain, Koch and Hague are all members of NASA’s 2013 astronaut class, which was 50 percent women.

Koch and McClain’s spacewalk is set to last for about seven hours and will be broadcast on NASA TV. Schedules and assignments for EVA missions can change, but it will be a spacewalk for the history books if all goes as planned.

The Lion King remake has already beaten the original Lion King at the box...