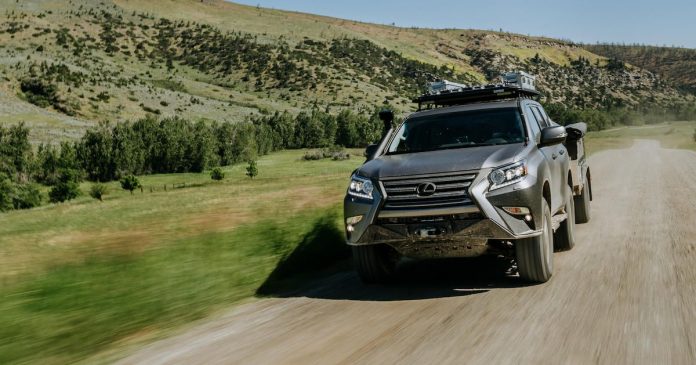 Most Americans think of Lexus‘ GX SUV as being the second-biggest thing you can buy with a Lexus badge on it, behind the Land Cruiser-based LX. What a lot of people don’t know is that elsewhere in the world, the GX is sold as the Land Cruiser Prado and has a pretty serious reputation for its off-road ability.

Lots, actually and to get it done, it turned to the well-established aftermarket for the GX/Prado. Some of the highlights include a custom bumper with a hidden Warn winch, aluminum roof boxes and a super trick Patriot Campers off-road trailer with a built-in tent.

Underneath, the GX shares a lot with its bigger, more expensive sibling the LX. It’s got a relatively under-stressed V8 gasoline engine under its hood, has full-time four-wheel drive with a locking center differential and is built with body-on-frame construction. It still has all the Lexus luxury touches you’d expect too.

At the end of the day, the purpose of the GXOR concept is to get people stoked about having adventures and going off-road in a big expensive SUV — something that people don’t really do here in the US in the same way that they do in places like South Africa and Australia — and you know what, it worked (on us at least).

Now if you’ll excuse us, we’ll just be looking at used GXs on Craigslist.

2020 Lexus RX ups its tech game for a new decade

Trump’s Space Force: Everything you need to know