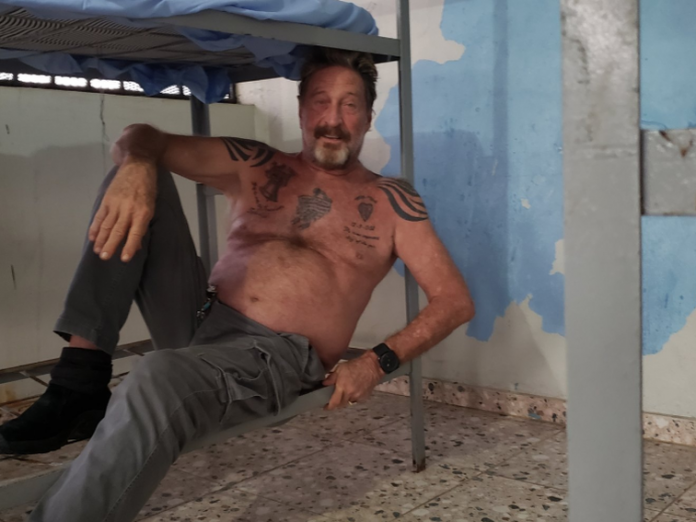 John McAfee has tweeted photos of his time in jail this week after being released Wednesday after apparently going missing. “My second arrest in one week – a record I think,” he tweeted alongside one photo of himself sitting under a bed in his cell.

The antivirus software pioneer has been on the run since 2012 after his alleged involvement in a murder in Belize, which he denies. Data hidden across the world by the 2020 presidential candidate and maker of an “unhackable” cryptocurrency wallet would have been revealed if he remained detained, tweets earlier this week said.

He added that the first photo was his wife’s favorite picture of his jailhouse photoshoot. “Janice was incarcerated in the cellblock next door at the same time. She just forgot how to properly smuggle phones,” he said.

McAfee was arrested by the Dominican Republic Armed Forces while docking his yacht in Puerto Plata, AP reported Wednesday afternoon. Multiple high-caliber weapons as well as ammunition were seized during the arrest, AP said. On July 19, McAfee had tweeted a picture of himself and his wife holding guns on his yacht.

Loggia-Ramirez later told CNET in a private Twitter message that to his knowledge, McAfee was detained but not arrested.

McAfee last week tweeted his only “crime is not filing tax returns,” and claimed the rest of the charges against him is “propaganda by the US government to silence me.” On July 19 he’d said he would be going “dark for the next few days,” claiming the CIA “attempted to collect us.”