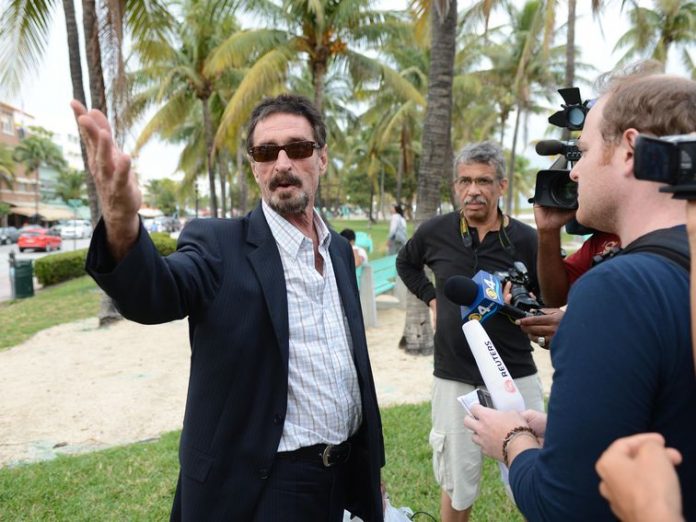 John McAfee has been released Wednesday after apparently going missing earlier this week, according to a tweet. Operating his Twitter account Tuesday, his campaign manager Rob Benedicto Pacifico Juan Maria Loggia-Ramirez said McAfee had been detained by authorities.

The antivirus software pioneer has been on the run since 2012 after his alleged involvement in a murder in Belize, which he denies. Data hidden across the world by the 2020 presidential candidate and maker of an “unhackable” cryptocurrency wallet would have been revealed if he remained detained, the series of tweets this week said.

McAfee was arrested by the Dominican Republic Armed Forces while docking his yacht in Puerto Plata, AP reported Wednesday afternoon. Multiple high-caliber weapons as well as ammunition were seized during the arrest, AP said. On July 19, McAfee had tweeted a picture of himself and his wife holding guns on his yacht.

“John, Janice and his crew are alive and in the process of being released from confinement,” Loggia-Ramirez tweeted from McAfee’s account Wednesday, adding that McAfee himself would tweet more details Thursday.

McAfee last week tweeted his only “crime is not filing tax returns,” and claimed the rest of the charges against him is “propaganda by the US government to silence me.” On July 19 he’d said he would be going “dark for the next few days,” claiming the CIA “attempted to collect us.”

“I have good reason to suspect that John McAfee, @theemrsmcafee and other companions have been detained by authorities at their latest port of call,” Loggia-Ramirez tweeted on McAfee’s account Tuesday.

“If John misses his next check-in, events will be set into motion that I cannot prevent once they have begun. John has secreted data with individuals across the world. I know neither their identities or locations. They will release their payloads if John goes missing.”

Loggia-Ramirez told The Techy Trends he has no more information about the detainment, but that he and others are “employing every possible resource to locate him and secure his release.”

The Twitter thread didn’t say when McAfee’s next check-in was scheduled, but he told The Techy Trends in a private Twitter message that the “response has been pre-coordinated in the event something like this happened, and it that has many moving pieces involving people unaware of each other.”

Loggia-Ramirez later told The Techy Trends in a private Twitter message that to his knowledge, McAfee was detained but not arrested.

Danny DeVito Really Appreciates That the Secret Bathroom Shrine Made at...