Stephen King has a lot to answer for. He’s ruined the reputation of vintage cars (Christine), Saint Bernard dogs (Cujo) and snowy hideaways (The Shining). But he’s really destroyed the good name of clowns, as Pennywise from It might be one of the most nightmarish horror creations ever.

It Chapter 2 follows up on 2017’s critically acclaimed It, and both are based on King’s 1,100-page, 1986 best seller. It Chapter Two recasts the Losers’ Club with adult actors, and continues the plot 27 years after the first film. The film opens Sept. 5 in Australia and Sept. 6 in the US and UK, but social media reactions started to creep out on Tuesday. Here’s a look at what some early viewers are saying.

Peter Sciretta of Slashfilm is calling this second film “probably scarier than chapter one — more Pennywise imagery to haunt your dreams.” But he also found it less charming than the first, and overlong.

Sean O’Connell of CinemaBlend liked but didn’t love the film, yet is one of many critics raving about the performance of Bill Hader as Richie Tozier.

‘First half is great’

Mike Ryan of Uproxx had a definite preference for the first part of the film, and loved the new adult cast.

“It’ll make more money than Warner Bros knows what to do with,” writes Drew Taylor of Moviefone. Oh, we think they’ll find a way to use the cash. 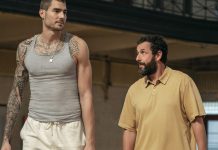