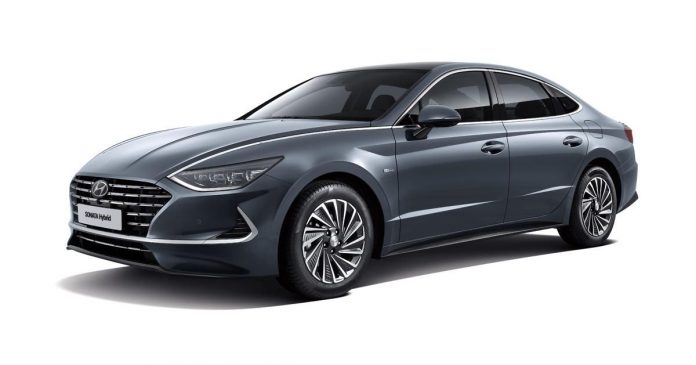 When Hyundai introduced the wild new 2020 Sonata, it only introduced models with gas engines. Having success with hybrid variants in the past, we knew it was only a matter of time before Hyundai debuted a new Sonata Hybrid, and now, here it is.

Hyundai on Monday introduced the 2020 Sonata Hybrid. It looks just about the same as its gas-only siblings, but there are a few key differentiators. There’s a fresh grille that’s exclusive to hybrid models, in addition to a specific rear spoiler and some cool alloy wheels. We haven’t seen the interior yet, but we’d bet dollars to donuts that it’s pretty much the same as the standard Sonata.

The exterior really sets itself apart from the other Sonata models by its new solar roof. Hyundai didn’t give out too many details, but the automaker claims that the roof is capable of increasing the vehicle’s overall range by about 800 miles, provided it gets six hours of daily charging from the sun. Assuming 365 days of use each year, those six hours of charging provide, on average, just a couple extra miles of range each day.

The Sonata Hybrid also benefits from Hyundai’s new Active Shift Control technology. It’s essentially a new bit of programming for the hybrid system’s control unit that claims to improve shift times by some 30% without sacrificing smoothness. The shift-speed adjustment should also help the car feel a bit sportier, not that the Sonata Hybrid is built for sporting pretensions.

Hyundai’s latest fuel-sipper also packs some cool tech from the gas-engine variant. Hyundai’s digital key system uses near-field communication to allow a person’s phone to act as a vehicle key. It can also lock, unlock and remotely start the vehicle using Bluetooth Low Energy. On the safety front, the Sonata Hybrid also packs a lane-following system that can keep the vehicle centered in its lane at speeds between 0 and 90 miles per hour.

As for the powertrain, Hyundai only put out the specs for the Korean-market Sonata Hybrid. In that iteration, it will mate a hybrid-electric system to a 2.0-liter Smartstream inline-4 gas engine for a net system output of 192 horsepower. Hyundai will likely have a separate release in the future with information catered to the US market. The 2020 Sonata Hybrid’s release date remains unclear, as well.

2020 Hyundai Sonata brings an extra dose of style to…