Huawei seemed to address controversy over its alleged links with the Chinese government by running a poll on its official Twitter account asking followers who they thought owns Huawei. The poll started on Friday and got 56,790 votes.

“Who do you think owns Huawei? #WhoRunsHuawei,” the Chinese phone manufacturer wrote.

The company was blacklisted by the US in May when it was added to the “entity list” due to concerns about its relationship with the Chinese government. However, US companies will be able to sell equipment to Huawei if they’re given licenses and there’s no threat to national security. In July, US President Donald Trump reportedly agreed to award those licensing deals in a “timely” way.

Trump also signed an executive order essentially banning Huawei in light of national security implications over the company’s alleged ties with the Chinese government — though it’s repeatedly denied those links.

At the time, Google locked Huawei devices out of updates for its Android operating system, but the Commerce Department granted it a three-month general license in late May to update existing devices. Huawei then moved to trademark the name of its in-house operating system, “Hongmeng,” in Peru, suggesting a move away from Android. A report this week said the first Hongmeng-powered phone will be released this year.

Huawei didn’t immediately respond to a request for comment on the poll. 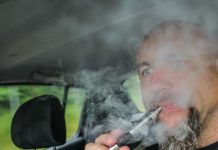