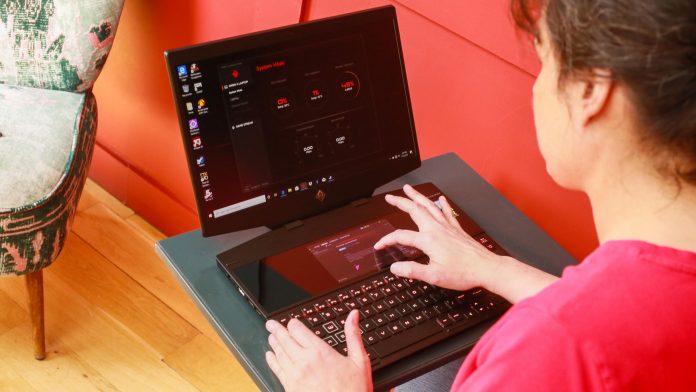 Is it worth paying for a small second screen on your gaming laptop? Based on some time with the HP Omen X 2S and its six-inch 1080p touchscreen above the keyboard, I’d give it a big, fat… maybe. Thus far, the 2S strikes me as a well-designed, fast 15-inch system that’s surprisingly light (though I’ve just been toting monster 17-inch models, so maybe its 5.2-pound heft is relative).  And being able to monitor Slack while I game at work is always a big plus. But the implementation makes it obvious that these multiscreen designs are still rough around the edges.

The 2S’s second display is for watching a stream, chatting, listening to music, killing time waiting for a match or monitoring your system stats via the command center. To Windows it looks just like a second monitor, which means you can drag any window down to it and display any type of content.

As I suspected when HP launched the laptop, the small touchscreen isn’t in a great spot for a lot of uses unless you put the laptop on a tilted stand; to watch video or read messages you have to pretty much loom over the keyboard. It’s crisp and bright with a good viewing angle, but that’s not the same as being able to tilt a phone or tablet to put it anywhere you want in your line of sight.

The Asus ZenBook Duo‘s second screen is in the same location, but that laptop’s hinge lifts the base, which tilts the screen to a slight angle which seems a little better ergonomically.

It’s not as bad as I expected, though. The occasional loom to check Slack or Discord provided a nice back stretch. And it really is perfect for monitoring system stats, for example. Because it’s a normal window that can use the mouse as well as touchscreen controls, it’s a lot easier to scrub through walkthroughs — don’t judge me — to find the exact spot where you’re stuck without the frustration of fat-fingering the timeline.

The Command Center integration with the second screen is a bit disappointing. When you pop it into the smaller display, it scales back the features you can access. For instance, you can’t see or configure peripherals and lighting there. I just wanted to see the charge level of the Photon mouse and that required toggling back to the big screen.

You can also use it to pin and magnify a section of the screen, a feature dubbed “screen mirroring.” Sadly, it’s a lot less useful than it sounds.

To set it up, you run the game and are prompted to draw a rectangle around the area of the screen you want to mirror; a mini-map is the most obvious example. It uses the coordinates of that rectangle to pull the contents from that area in the graphics memory and display it on the second screen. If the area you’ve selected is smaller than the second screen, then it gets scaled up to fill it, which essentially magnifies it.

But there are a bunch of drawbacks. For one thing, it doesn’t work with first-person shooters, because they can’t relinquish control of the display to HP’s software for you to delineate the area. The laptop’s screen is pretty low-resolution, 1,920 x 1,080, so not much will render so small that you’d benefit by magnifying it a bit and placing it out of your view; since it mirrors, you don’t save any space onscreen or move it out of the way. In fact, if you relocate the section you’re mirroring — such as swapping the map and the shop in Dota 2 — you have to redefine the mirrored area.

The second screen also consumes battery, though we’re still testing so I don’t know how exactly how much of an impact it has. But the Omen X 2S is a gaming laptop, so don’t expect to be running on battery much, anyway.