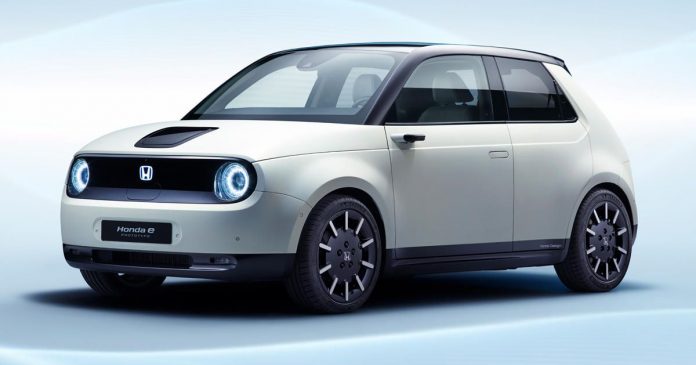 It might not be 100 percent of what you remember, but Honda’s much-lauded Urban EV concept from 2017 will put its foot in the production door at the 2019 Geneva Motor Show as the Honda E Prototype.

The Honda E Prototype, slated to make its official debut at the 2019 Geneva Motor Show, started out life as the Urban EV concept at the 2017 Frankfurt Motor Show. Honda uses the “Prototype” designation to refer to a car that is nearly, but not entirely production-ready. Previous examples include the Insight Prototype and Civic Type R Prototypes, both of which lacked visible interiors during their debuts.

But the E Prototype feels pretty darn close to the factory gates, closer than previous Prototype cars. Surprisingly little has changed from one to the other. The E Prototype spawned a second set of doors, offering a bit more versatility. The grille loses the screen and adds concavity. The black strips near the bottom have grown to consume the lower part of all body panels, and there are some different wheels on there, but on the whole it’s a faithful push to production.

One hint that the E Prototype wasn’t exactly built with the US in mind comes by way of the rearview mirrors. There aren’t any — instead, they’ve been replaced with Honda’s Camera Mirror System, a system that’s still against the law in the US, despite new cars like the Audi E-Tron promising production versions of similar systems. The charging port is hidden under the black patch on the hood, and LED lights shine through to let owners know about charging status.

Honda already teased the interior, but now we can see more. The seats use sofa fabric to add some uniqueness. As we noted in the teaser, the dashboard is almost entirely screen, with information displayed in front of both driver and passenger. At the corners are additional screens to display what the Camera Mirror System sees on either side. There are physical buttons for the climate controls, just above USB, HDMI and AC power ports. The tiny center console holds the push-button shifter.

The Honda E Prototype rides atop a dedicated rear-wheel-drive EV platform. Honda didn’t say how much power its electric motor puts out, only that it has enough juice “for next-generation small-car performance.” Honda also didn’t say how big the battery was, but it appears that the only thing smaller than this car is its range, which Honda says is “over” 124 miles. Considering how much flak Honda (rightfully) received for its 89-mile Clarity Electric in 2018, I was hoping for range closer to 200 miles. But then again, Europe’s just a bit smaller than the US, and this car isn’t for us.

Alas, it’s all but a given that the E Prototype won’t be gracing our shores, at least to start. Honda even says in its press release that the car is (emphasis mine) “a key part of Honda’s ‘Electric Vision’ strategy for Europe.” Nevertheless, light an extra prayer candle tonight and hold out hope that Honda deigns to bring some of its best styling in years to the US. Keep your eyes on Roadshow next week as we get up close and personal with this twee EV.

The home version of the Pac-Man cocktail table arcade game can be yours for...