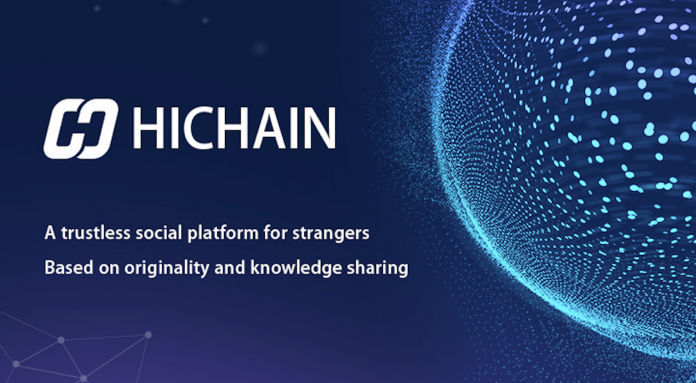 HiChain aims to establish a blockchain-based platform for content creators and social communities. Since the inception of the project, HiChain has caught the attention of prominent industry players; HiChain has received investments from Huobi Global and OKEx, two of the largest crypto exchanges in the world, as well as from China’s top Blockchain Funds, such as LD Capital and JLab.

According to previously released information, HiChain is a blockchain-based digital content and asset platform that centers on original content and knowledge sharing.  As the next generation social platform for strangers, HiChain seeks to build a decentralized social network platform that will enable users to exchange and monetize their personal data and/or original content with other users or entities as they see fit. By giving control back, users no longer need to worry about privacy violations nor their original content being unfairly exploited.

According to the HiChain website, The HiChain Founding team reflects its global ambition, with members hailing from Singapore, China, United States, Hong Kong and Australia.  Together they have many years of management and experience in social media and traditional media, community building, Artificial Intelligence, blockchain technology and marketing.

As the founding members have often stated, the platform will promote many of the spirit of Blockchain: open, borderless, fair, transparent, autonomous, self-governing. The platform will also encourage the equitable rewarding for the contribution, aggregation, creation, sharing and dissemination of content and knowledge.

In addition, existing or new social communities can leverage HiChain’s blockchain infrastructure and ecosystem to innovate, create new DApps and amplify their network value through active creation and sharing of original content by their users.

At present, HiChain has been recognized by many famous content creation and social platforms at home and abroad; and HiChain is actively exploring and promoting integration with ecosystem partners.

To ramp up adoption of its platform, HiChain Foundation has established partnerships with one of China’s largest anonymous social content platforms and a regional video sharing platform, both of which have a combined user base of 150 million users.