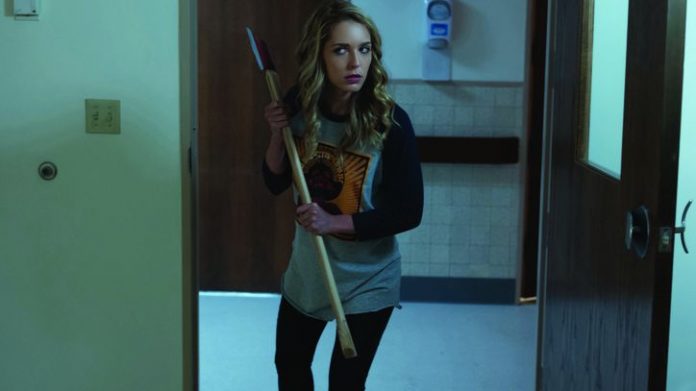 Following the Groundhog Day premise of the first movie, the wackier and funnier sequel initially seems like it’ll move the story of Tree (Jessica Rothe) forward from the literal last second of the first film. She spent that whole movie trapped in a time loop on her birthday, getting killed by her jealous college roommate and waking up having to relive the day until she solved the murder.

Happy Death Day 2U, which opens Wednesday, at first aims to expand this concept by trapping bumbling science student Ryan (Phi Vu) into a new time loop, one Tree and her new boyfriend Carter (Israel Broussard from To All the Boys I’ve Loved Before) aim to stop with the help of students working in the school’s science lab.

Unfortunately, the science behind the time loops of both Happy Death Day films is the least interesting part of the films. While alternate dimensions and the multiverse might add great fun to Star Trek: Discovery, Marvel movies and time-travel films like Back to the Future Part II, in Happy Death Day 2U the ideas come across like a dull, sleepy science class.

That said, once the science is over, Happy Death Day 2U veers back to its core: telling a ridiculous story full of amusing death sequences and funny banter among characters, a few of whom are as cartoony as ever. As the trailers reveal, Tree gets stuck in a new time loop but with her world remixed, and the movie franchise’s genre along with it.

Nearly all of the first movie’s characters return thanks to this premise. Some are totally different, others appear much the same but have different relationships. And instead of necessarily having to solve her own murder, Tree’s trying to figure out whether to restore her original life or embrace a new timeline that feels like an idealized version of her life.

Seeing all of the characters return and some of the first film’s sequences revisited in a slightly different setting is a plus for anyone who enjoyed the original film, but anyone hopping into 2U without watching the first film will likely lose out on these references.

At first glance for fans of the original movie, each of these scenes seems like a re-creation of what was already told the first time. However, thanks to the premise, the twists and deaths keep changing. And unfortunately for Tree, this also means even more dying and reliving the same day over and over — which at this point she handles with expertise during a montage of her committing suicide in a variety of ridiculous ways.

The film’s third act takes one more genre-hop into becoming a heist film, and with that turn another actress, Rachel Matthews, gets to shine as Danielle, Tree’s attention-demanding frenemy. Matthews brings absurd character acting to a hilarious bait-and-switch scene that nearly steals the spotlight from the entire film.

Inside an indie: Making a film from scratch without a Hollywood budget: “Go to the networking event. Show up.” A look at what it’s like to make a movie without the resources of a big studio.

The Lego Movie 2 review: Not as awesome as the first, but it’s pretty close.