I see a little black square held up in front of me. It looks like nothing, just a lump of black plastic with a row of gold contact pins on the bottom. It could be a little memory stick. Or maybe a garage door opener. It’s surprisingly nondescript.

This is the new Jacquard Tag. What Google’s showing me is the brain that’s going to go into a line of clothing and fashion products this year, starting with an Yves Saint Laurent smart backpack. And what will the clothing and wearables do that connect with this device? For now, gestures and taps to cue up Google Assistant on the go. But after that, maybe more. Google’s Jacquard 2.0 aims to ride alongside another experimental technology, the radar-based Soli tech in the upcoming Pixel 4 phone, to drive the company’s ambitions towards an ambient computing future.

I spoke to Google’s ATAP (Advanced Technology and Projects) Director and Technical Project Lead Ivan Poupyrev and Dan Giles, PM for Jacquard by Google. Poupyrev and Giles are guiding the launch of the next wave of Jacquard products. They explained why Google’s sticking these tags and sensors into clothes, and told me what could come next.

Google first debuted Project Jacquard, a smart fabric initiative to create gesture and tap-connected wearables without screens, back in 2015. I saw demos of Google’s Jacquard smart fabric back then: The woven material was touch sensitive and could work like a giant flexible trackpad. A sleeve could act as a touch interface. And who knew what else.

Two years later, a Google-powered smart jeans jacket from Levi’s, the Commuter X jacket, debuted. The jacket worked like a remote to your phone: Touching the fabric controlled music and phone functions, but only a certain subset. I never got to wear the jacket, but I was skeptical of it. I didn’t like its limited use, the limited washability or its cost. That was 2017.

This year, Google plans to start building a larger wave of Jacquard products. It’s starting with a high-end backpack and a new Jacquard app that will allow customized Google Assistant requests to be assigned to gestures.

The next wave of Jacquard things

The Yves Saint Laurent Cit-e backpack is the first new fashion product with Google’s new Jacquard Tag inside. It’s a $995 luxury bag with a touch-and-tap-enabled left smart strap. This product isn’t designed for me, and it isn’t likely designed for most everyday people. That’s why I’m even more curious about the products Google’s not telling me about yet, ones that I’m told will be more affordable and will also include the Jacquard Tag.

Ivan Poupyrev has been with ATAP since 2014 and birthed both Jacquard and Google’s Pixel 4 radar-based tech. “We’ll have more stuff coming from us, fingers crossed. You never ship until you ship…but you will see some surprising things using this technology,” he says.

Poupyrev and Dan Giles tell me not all Jacquard products will be luxury priced.

The new Jacquard 2.0 platform uses a smaller, possibly more durable chip underneath, which is the black puck I’ve been shown. The Levi’s jacket used the first-gen version. The tinier piece of hardware can be embedded more places — perhaps even shoes or hats (smart shoes are definitely becoming more of a thing recently). It can interface with modules that Google designs to be flexible for future products, but are requested as needed by designers of new Jacquard-enabled products. Some products could even end up having more than one.

Modules that work with the Tag, such as LEDs or touch sensors, are developed by Google to meet manufacturer needs. But the goal is to have a library of module options that people working on future Jacquard-enabled clothing and fashion could choose from when making a product.

A new app and interface

The first Jacquard product, the Levi’s jacket, had its own purpose-built app. But Google’s made a new Jacquard app that will allow all future products to connect, and custom-assign gestures to new features.

Jacquard still only allows for four gestures on a piece of smart clothing: stroking in one direction (“brush out”), the other direction (“brush in”) or double tapping. There’s also a “cover” mode that cancels an action when you put your hand over the area. (“We don’t want to overcomplicate it,” says Poupyrev.) But the assigned commands have expanded. A selfie camera remote has been added with a haptic countdown timer. A “Today” function plays back a customized Google Assistant report with news, weather and other highlights that can be fast forwarded with a swipe.

The app can also specifically launch discrete Google Assistant requests and tag them to one of the gestures. A stroke in one direction could bring up the nearest taco place. A double tap could summon a weather readout.

Jacquard still only allows one action at a time to be mapped to each gesture, which limits how much you can do. “We don’t have multitasking right now…it’s like the early days of iOS or Android,” says Poupyrev.

Poupyrev and Giles see folding in Assistant, and using gestures in addition to voice, as a new direction for Google’s AI. It may also be a sign of how voice and gestures could combine in Google Assistant products down the road. “Non-verbal cues of interaction between people can be from 50-90% of everything being communicated,” says Poupyrev. “Bringing these non-verbal cues into the conversation with technology is a key opportunity and a huge challenge at the same time.”

I wonder how durable future Jacquard clothes and wearables will be. The Levi’s Commuter X jacket couldn’t be dry cleaned, and Google’s care instructions suggested the jacket had only been durability rated for only 10 washings. Poupyrev and Giles claims that all products are “made to withstand,” but they didn’t go into specifics on lifetime wear and tear. The removable Jacquard Tag lasts about two weeks on a charge, is separately rechargeable and still needs to be removed before washing. Poupyrev claims that the Levi’s jacket “aged really well, actually. We build it really robustly. We didn’t have many returns.”

What about the future of original Levi’s jacket? Will there be a sequel? Google wouldn’t comment, other than to say the first version will get updated to the new software and Assistant-accessing functions of other Jacquard products.

Poupyrev did suggest that Jacquard could somehow be applied to sustainable clothing care. “Brands talk about sustainability, more sustainable practices, how to use clothing…maybe wash it less, use less water. These are things we’re thinking about, too.”

Could Jacquard and Soli intertwine?

Somewhere between voice and cameras, Google sees possibilities in ambient gesture controls. The experimental ATAP team has been working on several approaches for years, and both Jacquard and Soli (the tech that’s debuting in the Pixel 4) were developed at the same time. But ATAP used to be more independent, led by former DARPA leader Regina Dugan, and now lies inside Google’s hardware division. This lines up with Jacquard and Soli’s move from experiments to tech that’s emerging in actual products.

They’re also solving, in some ways, for the same problem using different methods: Jacquard looked at ways to build interfaces into textiles and wearables, while Soli looked to use radar to allow air gestures that could work without needing standard cameras.

I note to Google that the two have a lot in common. “You’re absolutely right. We started both projects five years ago, about the same time,” says Poupyrev. “They’re very matching efforts.”

But to Poupyrev, the approach for both is also different. “Both projects look at different things: one project [Jacquard] looks at how we build a supply chain,” Poupyrev explains, while “Soli, my thought was, there’s no good sensors which work for ambient computing, they’re all so narrow.” Poupyrev sees Soli as “one sensor that can power them all…that’s the goal.”

Soli hasn’t debuted in any product yet. Pixel 4 will be the first. And Jacquard is only on its second product. But the two platforms could eventually dovetail down the road. “It’s in the realm of possibilities, we’re thinking about it all the time,” says Poupyrev. “I don’t know how much speculation I’m allowed,” he says with a laugh.

Will Jacquard come to furniture and smart homes?

I try to get a hint of what will happen after the backpack, but Poupyrev and Giles won’t bite. But while none of the expected Jacquard products this year will be related to smart homes or furniture, those areas are of interest.

“We’re talking about ambient computing here,” says Poupyrev. “The vision is to make computing universally accessible, universally helpful. There’s a very famous quote from the father of ubiquitous computing, Mark Weiser, from the 1990s, he was talking about technology being woven into the fabric of our everyday lives.”

Fabric is still what Jacquard is all about, and fashion. But with Soli’s tech debuting soon, there’s a chance that Google’s ambient computing ambitions will also continue to change. But as Google has come under more scrutiny for security practices and questions about privacy in emerging tech continue to rise, it remains unknown what having Google-connected fashion in our lives will mean and how Jacquard will develop next. 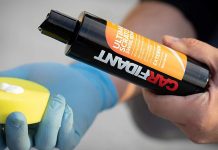