Google’s latest Doodle may leave your mouth watering. Thursday’s Doodle celebrates the 124th birthday of Ignacio Anaya Garcia, and while you may not recognize his name, you’re likely familiar with his culinary creation: nachos!

The animated Doodle demonstrates how Garcia invented the tasty treat in 1943 when a group of wives of US military personnel stationed at an army base in Texas popped into the Club Victoria, a restaurant in the Mexican border town of Piedras Negras. The women wanted a snack, but Garcia, who was the restaurant’s maitre d’, couldn’t find a chef, so he took chips, cheese and chopped chilis in hand and revolutionized bar cuisine forever.

Nacho’s especiales — named after the nickname for Ignacio — were added to the restaurant’s menu and soon grew in popularity at other nearby restaurants. The dish was written up in an American cookbook in 1949, but the apostrophe in Nacho’s was lost as its popularity spread around the world.

For almost as long as Google has been around, it’s livened up its barebones search page with artwork that draws attention to notable people, events, holidays and anniversaries. But Google also likes to put food in the Doodle spotlight. Earlier this year, it honored the falafel as “the best thing that ever happened to chickpeas,” and in 2017, it cooked up a slideshow to honor the rice noodle.

A modified version of nachos, featuring liquid cheese, was served in 1976 during a Texas Rangers game at Arlington Stadium in Arlington, Texas. Two years later, during a Dallas Cowboys game, sportscaster Howard Cosell mentioned that he had snacked on some “nachos,” increasing the dish’s popularity, especially at sporting venues.

Garcia died in 1975. A bronze plaque was erected in his honor in Piedras Negras, and Oct. 21 was declared the International Day of the Nacho.

“This topic was meaningful to me at a gut level, quite literally,” he told Google, adding that drawing a Doodle for Google has been a goal of his for a while. “I hope people get an instant craving for a snack after they see the Doodle. I also hope that they instantly drop whatever it is they’re doing and satisfy that craving.” 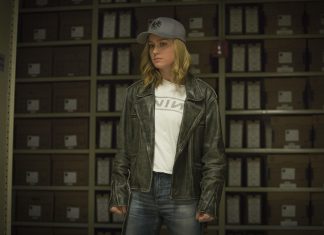 Captain Marvel review: A soaring tale of self-discovery with a ’90s...