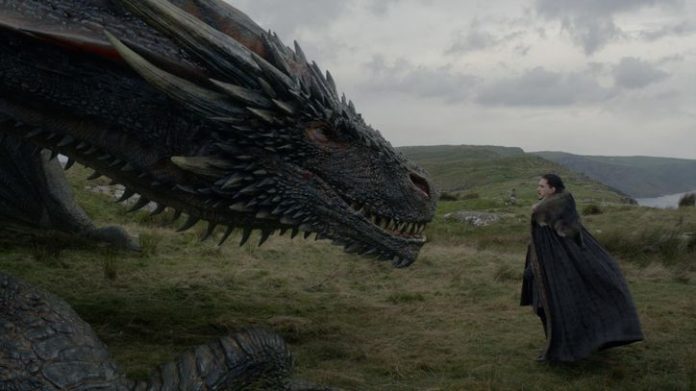 As the final season of HBO hit Game of Thrones approaches in April, there are near-daily rumors about what will happen to characters like Jon Snow, Cersei Lannister and Arya Stark. But human beings aren’t the only ones who’ll have to fight their way to the end.

Daenarys Targaryen’s dragons — Drogon, Rhaegal and Viserion, who’s now a terrifying ice dragon — will have a major stake in what happens, too.

Few people know the dragons better than Sven Martin, a visual-effects supervisor in Frankfurt, Germany, who worked to animate the dragons for international effects company Pixomondo.

Martin’s resume includes work on Super 8, Star Trek Into Darkness and The Hunger Games, and his work on Game of Thrones has won him two Emmys.

He doesn’t do it alone. The dragon team consists of 30 to 40 artists, he said. Add those who worked on castles, wights, ships and other elements, and as many as 300 artists were involved. Renowned creature designer Dan Katcher designed the dragons.

Martin had the right training for working with dragons.

“Fun fact is that my graduation film in film school was a short about a father dragon showing his son how to fight off dragons,” Martin told me. “For the short, I had done plenty of research about all type of mythological dragons and was therefore well-prepared.”

The dragons look real on screen, but they’re all computer-generated.

“No puppets or animatronics were ever used on Game of Thrones,” Martin said.

But sometimes, a physical part of the dragon needs to be built, especially when actress Emilia Clarke, who plays Daenerys Targaryen, has to be seen riding on the creatures.

Clarke needs a 3D “dragon” to interact with, so movable platforms or Styrofoam representations of the back of Drogon, the dragon she rides, were built by the production’s special-effects crew, Martin said. A movable “buck,” like a flight simulator, was used for flying scenes. In post-production, Martin’s team keeps the footage of Clarke, but replaces those physical dragon substitutes with computer-generated renditions of the dragons.

Every detail of the dragons has a counterpart in the animal world.

Those dragons have as much of a basis in fact as a mythical creature can. Martin knew from the beginning he wanted to help ground the Game of Thrones dragons in the real, scientific world and “not just follow a cool design for its own sake.”

“What makes the dragons from Game of Thrones so special is that they are not just beasts or monsters, nor are they overacted movie characters,” Martin said. “Their overall treatment as real living animals with just enough expressions to understand their feelings makes the audience to connect with them, similar to the emotional connection with pets.”

That approach couldn’t have been better suited for a show like Game of Thrones, where everything from the dragons to the direwolves to giants such as 14-foot-tall Wun Wun are created to be as realistic as possible.

“I think this is the reason so many people can connect with the series, (even if they aren’t) normally fans of fantasy movies,” Martin said.

He himself had “no idea” what author George R.R. Martin’s Song of Ice and Fire book series was when he started working on the show in 2011, but was “thrilled” by the chance to create realistic dragons who’d be seen interacting with humans. That level of preparation involved plenty of research into prehistoric birds, crocodiles and other creatures that seemed like they might be kin to Drogon and crew.

“Following the idea of grounding the dragons in reality, we started to build them from inside out, meaning having a real skeleton structure as the base, muscles with fat and skin on top,” Martin said. “Based on the initial design and the baby (dragon) model from season 1, we altered the design more towards birds, knowing the dragons have to fly in later episodes. Researching bird and bat anatomies led us to increase the chest bone and change wing body proportions.”

For the dragon’s features, the Pixomondo crew researched lizards, snakes and other reptiles. A supermarket chicken, of all things, helped them study how bird wings stretch and move.

“For the skin color patterns we went even further, picking ideas from frogs or cheetahs,” Martin said. “Every detail of the dragons has a counterpart in the animal world.”

The dragons began as eggs, started as babies, and quickly grew to the enormous, airplane-size creatures they are today. The animations had to change, too, Martin said.

“In season 3, some new design features got implemented to support their new role as Dany’s guard dogs,” he explained. “Based on the idea of existing frilled lizards, the dragons got this row of frills on the neck, popping up when threatening the enemy. This is supported by a forward-sliding upper jaw element to expose the fangs better.”

With each new season, the dragons had to be rebuilt as the three creatures grew and changed.

“One single chest scale of the adult dragon is roughly the size of the baby dragon in season 2,” Martin said.

The artists also had to think about what’s going on inside the dragons’ brains.

“While being mostly cute in the second season, they get stronger in season 4,” he said. “But similar to teenagers or tweens, they are not fully aware of their power, and are starting to rebel against their mother.”

If you watch the dragons carefully from season to season, you might spot a few changes that were required by the storyline.

Once Daenerys started riding Drogon, more spikes were added to his back to make it easier for her to climb aboard.

“Making Dany climb up on Drogon’s back was actually one of the most challenging tasks, both for design and animation,” Martin said. “He’s so big! We didn’t want to cheat, so we came up with a combination of using the wing as an elevator and neck spikes as climbing handles. The production team built a special mechanical rig operated in sync with our pre-animation to help (actress) Emilia Clarke step (up) and lift down on set.”

Viserion became an ice dragon at the end of season 7. His new look was based on an emaciated version of his frame combined with the wrinkly skin of the eerie, ice-eyed Night King, who was last seen riding Viserion into battle to attack the Wall.

“(Viserion’s) skin is more translucent and (now has) an icy color tone, with fine ice spikes scattered along the body edges,” Martin noted. “Last but not least, the eyes did turn ice-blue, the signature element of the reborns.”

While Martin can’t give away any secrets, look for the dragons to burn bright in the show’s final season, which he calls “amazing.”

“How the dragons are used in the story and in scenes feels very natural — they do live in the world of Westeros,” Martin said. “I’m personally very proud that we could accompany their growth for such a long time.”

Game of Thrones returns to HBO on April 14.

You Won’t Have to Wait for This Ethereum Scaling Solution, It Works Now

‘Doctor Doom’ vs Crypto: Here’s What to Expect in Congress Today