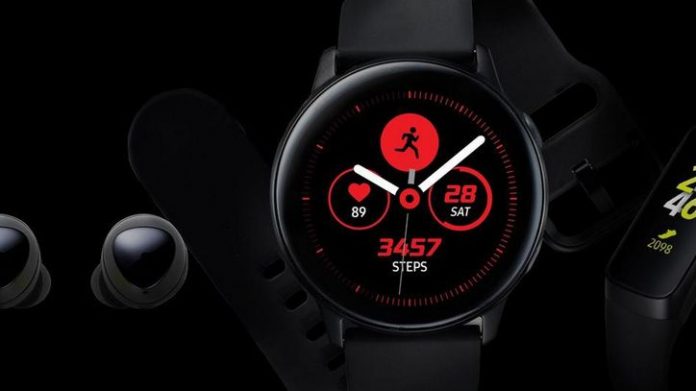 Samsung on Thursday inadvertently revealed its new lineup of wearable devices in an update to its Galaxy Wearable app. The leak, first spotted by SamCentralTech, shows a 40-millimeter fitness-focused smartwatch called the Galaxy Watch Active, heir apparent to Samsung’s previous fitness sport watch, the Gear Sport, which was released nearly 18 months ago. Also on the list of new devices is two apparent fitness bands called the Galaxy Fit and Fit E. The Fit E name first appeared in a Bluetooth certification listing spotted by The Android Soul last month.

The new products detailed in the update are expected to be unveiled next week with the Galaxy S10.

The leak also appears to confirm that Samsung will be bundling a set of its rumored wireless Galaxy Buds earbuds with preorders of the Galaxy S10. An image that leaked out last week showed what appeared to be the wireless earbuds, resting on the back of what might be the upcoming Galaxy S10 Plus and suggesting they can be charged wirelessly from the phone.

The Galaxy S10 — Samsung’s new flagship handset — is set to debut next Wednesday at Samsung’s Feb. 20 Unpacked event. At this point, we know just about everything there is to know about the Galaxy S10, given the staggering amount of leaks we’ve seen and highly credible rumors we’ve heard.

Samsung didn’t immediately respond to a request for comment.