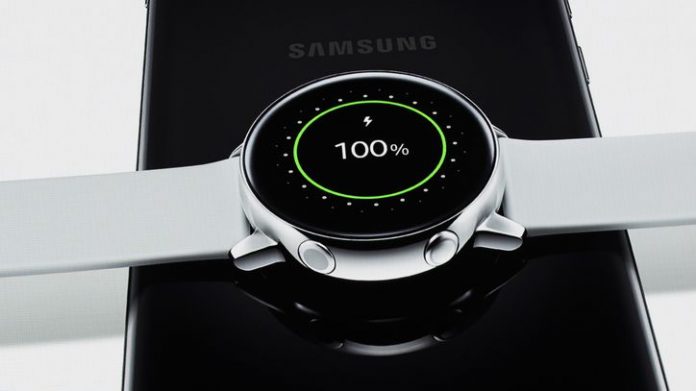 Samsung’s newest Galaxy S10 phones allow other devices to charge off the back of the phones via the wireless Qi standard. That means, yes, even other phones. But it also allows Samsung’s new, wireless Galaxy Buds and Galaxy Watch Active to charge up, too, turning the phone into a big charging pad. That’s the part that I love. And it just might change the way I think about wearable battery life from now on.

The S10’s charging tech is called Wireless PowerShare, and it’s essentially similar to what the Huawei Mate 20 Pro introduced last year. What Samsung’s doing, however, feels a lot more exciting, because its entire product line is designed to charge off the back of the phones. It’s a hub for your own personal constellation of Bluetooth things.

Samsung’s also introducing this feature across all five of its new phones, making it the largest launch of this type of tech. And after this, it’s a safe bet other phone manufacturers will, too.

Samsung Galaxy Buds charge right off the back of the…

This also brings up a really annoying thing about most smartwatches and fitness trackers: they’re dongle hell. The Apple Watch has a special magnetized charger that’s not the same as standard wireless charge tech. Every Fitbit has its own unique charge dongle. It’s madness, and it prevents anyone from simply dropping any watch to charge on a regular wireless Qi charger. I wake up each morning and check to see how my watch and earbud battery life is doing. That’s my connected life in 2019. Sooner or later, it’s charging time… and I don’t carry around a bunch of chargers because I like being a normal human being (and yes, I wear watches to bed, to track sleep… except for the Apple Watch.)

The new Galaxy Watch Active and the Galaxy Buds all charge in the exact same way, and work via the phone’s 5W charging. The Galaxy S10 can’t charge more than one device at a time, but it’s better than anything else out there. And it would totally change the way I pack to travel, if I could charge everything else off the phone as needed.

The next iPhone is most likely coming when it always does, in September (unless something happens sooner). Apple’s new proprietary and delayed AirPower charge mat is expected in 2019, too, which will allow multiple devices to wirelessly charge at once. But that’s not the same thing as being able to charge everything through the phone itself. Could Apple include some form of reverse charging, at least like is what’s available now on the iPad Pro via USB-C? Maybe. But I don’t just want that. I want to be able to charge all the wearable things, too. That was Samsung’s biggest power move this year.