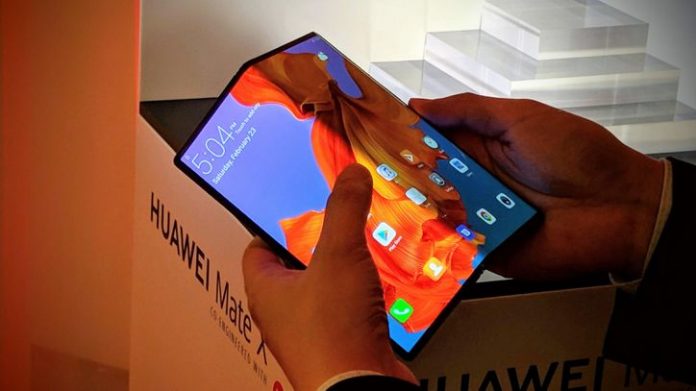 The Galaxy Fold officially has competition. Huawei announced its own foldable phone here at MWC 2019 in Barcelona, the Mate X. Both phones unfold into a tablet and have the option for 5G. They have eye-watering prices and launch later this year. But the similarities end there.

The Galaxy Fold has one small screen on the outside and a large screen on the inside, while the Mate X uses one screen on the outside in three different ways. It shapeshifts depending on how you hold the device. Samsung’s phone comes with 4G or 5G and six cameras. The Mate X has four cameras (three you can see now and one that’ll launch in March) and 5G across the board. And where the Galaxy Fold’s hinge won’t lay completely flat, Huawei boasts about the sophistication of its patented hinge.

We’re still learning more about both phones. I did get a chance to use the Mate X (and it was awesome), but the Galaxy Fold is still being bashful. Today it hid behind glass at Samsung’s booth, but it was hard to make out detail through the glass enclosure that surrounded the Galaxy Fold in a suit of reflective armor.

But here’s what we know about them so far, and how they both plan to take control of our brave new foldable world.

The fold, the screens

Does your phone fold in or out? Samsung’s Galaxy Fold takes the form of a book, with its largest screen on the inside, protected by the outer “cover.” Except in this case, one of the “covers” has a screen on it.

Huawei takes the opposite approach, with the screen hugging the frame. The advantage here is that you have one screen that can act like three, depending on how you hold the phone.

The Galaxy Fold has a fairly wide eyebrow notch on its 7.3-inch screen. This blacked-out area houses two camera lenses and sensors. The Mate X’s 8-inch display is notch-free, but it does have a strip on the back where the cameras line up, and a curved “wing” that serves as a handhold.

I got a chance to open and close the Mate X, and I think this wing is a clever design workaround that makes sense. It seemed to mostly work as a grip, though it isn’t a comfy handle, but it does help stabilize the device when it’s opened up in tablet form, making it easier to hold without cropping the sides.

But what about the screen durability? Glass isn’t at a point where it can bend enough to fold (but glassmakers are working on that), so polymer it is. That’s not a screen material you think of as being worth $2,000 or more, but there you have it. The bottom line is that with version one of foldable phones, it seems likely there will always be trade-off of one sort or another. We’ll have to see both phones side by side to see which one gets more in the way.

Samsung gives its Galaxy Fold a total of six cameras: three on the back, two on the front and one on the cover. Is this confusing or helpful? How easy is it to remember which camera to use for which type of photo you want to take?

And how do quality and convenience compare to the Huawei Mate X’s four cameras? It looks like there are three, but Huawei consumer CEO Richard Yu confirmed there are four — one that the company will turn on in March when it launched the Huawei P30 series of phones.

The Huawei Mate X will come in one configuration: 5G. In fact, Huawei boasts that it’s the fastest foldable phone there is (a claim we can only check when 5G is going strong). Samsung, on the other hand, will have 4G and 5G configurations, so you’re not tied to 5G if you’re not interested in paying the extra for 5G access.

Affordable foldable phones aren’t here yet, but companies like TCL are working on it. You’ll have to earmark at least $2,000 if you’re going to get either the Galaxy Fold or Huawei’s Mate X. But hold on. Let’s say you have the extra dough to spend. When do you get each phone, and will they sell where you live?

Huawei Mate X: 2,300 euros, sale date starting in select markets around June or July. Huawei says it isn’t announcing sale markets until 5G networks start taking off. Because of tensions with the US government, it’s doubtful that the Mate X will sell in the US. However the price converts roughly to $2,600, £2,000 or AU$3,660.

The specs (that we know about)