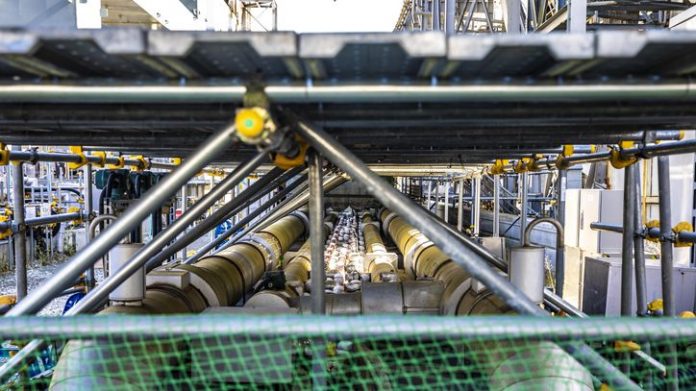 As we drive north from Tokyo, the city fades to a picturesque landscape of rolling hills and tiny villages.

Japan’s Fukushima Prefecture, ravaged by a massive earthquake and a series of tsunamis that leveled buildings and dragged boats, cars and the lives of thousands inland, is beginning to recover eight years later.

At the decommissioned Fukushima Daiichi Nuclear Power Plant, an army of robots has been enlisted to aid in the cleanup effort — going into radioactive hotspots too dangerous for humans. The company that owns the facility, Tokyo Electric Power Co., or Tepco, has been investing in community projects for the surrounding area.

But the visible recovery is undermined by the invisible; a still highly radioactive land and groundwater that continues to mix with the radioactive water of the destroyed reactors at Fukushima Daiichi.

One solution attempting to mitigate the ongoing water contamination is its ice wall, a super-cooler refrigerant being piped 100 feet underground, freezing the ground solid and stopping the flow of fresh water towards the sea.

The outer wreckage of the Unit 2 reactor, one of the most highly radioactive places at Fukushima Daiichi, so dangerous that no human can enter. With the Primary Containment Vessel damaged, the water needed to continually cool the reactors has been leaking from inside, mixing with the fresh groundwater flowing towards the sea.

A maze-like industrial landscape spreads out in front of us. Wearing multiple layers of cotton and latex gloves, three pairs of socks and rubber boots, we walk across a rusty ground towards the most recently conceived defense: a system of super-cooled pipes that freeze the soil going down 100 feet, stopping the outside fresh groundwater from mixing with the radioactive water within.

Though the defensive frozen wall goes down 30 meters, encircling reactor Units 1-4 in a 1500 meters ring, just the top portion of the pipe network freezing 70,000 cubic meters of soil is visible above ground.

The $300 million structure uses a coolant to bring down the temperature of each pipe to -30 degrees Celsius, or -22 degrees Fahrenheit. The cold emanating from each one hardens the soil around it, creating a barrier which is intended to stop the flow of fresh groundwater toward the reactors.

A technician monitors the ice wall operations from a building at the Fukushima Daiichi facility. Tepco says the wall is working, but a Reuters report in March of 2018 found the wall only somewhat effective.

“We know this is not the end of our effort,” says a company spokesman. “We will be continuously working hard to reduce the amount of generation of contaminated water.” Like much of the work being done at Fukushima Daiichi, this is all new territory, engineered on the fly, and every little bit of progress helps.

In a warehouse literally humming with activity, workers navigate the maze of valves and pipes inside the water purification facility at Fukushima Daiichi which is handling decontamination of radioactive water from the reactors.

In the past eight years since the accident, this has meant TEPCO has collected more than 1.1 million tons of leaking, contaminated water.

Where does it all go? There are currently 900 huge silos on site, and counting. TEPCO estimates it has enough space in the 37.7-million-square-foot facility to house an additional 270,000 tons of water, which means it will run out space to store any more water sometime in 2020.

The ice wall is part of the solution to this problem.

From an ultra-clean environment in the water treatment analysis center, glass beakers containing sea water and groundwater and water from the Advanced Liquid Processing System facilities.

Which Samsung Galaxy should you buy? We compare and contrast all 9 smartphones

A study of 657,461 children shows that vaccines do not cause autism

Sewage Water Could Be Purified For Drinking And Mined For Treasure

History Repeating? Why Ether’s Price Just Might Have Bottomed Out