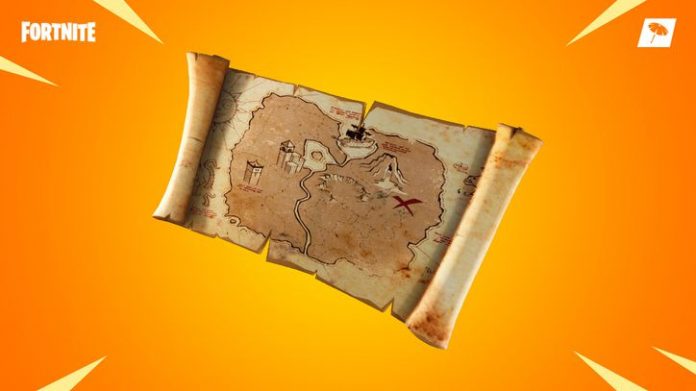 Fortnite: Battle Royale is in its second week of season 8 challenges, and this set has staged quests we’ve seen before, but also some that will send you to some of the newer locations on the island.

Apart from the regular challenges, there’s another thing to keep an eye out for since the latest update: treasure maps. You’ll find these treasure maps hidden in chests and in ground loot all around the island. When you get one, follow it to where X marks the spot, then dig down with your pick-ax to collect a buried treasure that will include at least one legendary item. Hold on a second though, if the theme is pirates this season, shouldn’t we be calling it booty? Yes, obviously we should, so go get that booty!

How to do stage 1: Land at The Block

This challenge has five stages and you can only get credit for one per match, so your best bet here is to concentrate on it for five straight games while you complete other challenges. After landing at The Block, the next stages are (in order): Dusty Divot, Polar Peak, Snobby Shores and Paradise Palms. Here’s where they are on the map to make it handy:

How to deal damage to descending supply drops

For this challenge you’re going to want to do a large group mode like Rumble because supply drops come more frequently especially in the second half of a match. Large group modes will also be safer because half the people on the island are on your team. That way, taking pot shots at descending balloons won’t make you as much of a target.

How to get eliminations in Salty Springs or Haunted Hills

This is a challenge you’re going to want to attack early in the week because that’s when most people will be landing at these locations. You have a couple of options for strategy here: You can simply land, grab guns and start shooting at either location or — for a more strategic approach — you might gear up nearby then quickly enter the location armed and ready. For this second option, try looting the pair of houses just south of Haunted Hills or the houses just northeast of Salty Springs if you’re going to that location.

How to do stage 1: Gain health from apples

This is a little more challenging than it looks because you have to have been hurt in order to heal with apples. There are a lot of places around the map to find apples (and you’ll need 25 points of healing), but my favorite locations are probably near Lonely Lodge, Retail Row or on the hill southwest of Salty Springs. Stage 2 of the challenge requires you to use campfires to heal 50 points and that includes both the ones you carry with you as well as the ones that sit around them map. For stage 3, you’ll need to use a medkit and heal at least 75 points to complete the challenge.

How to visit the furthest north, south, east and west points of the island

This new challenge might have been more difficult if Epic hadn’t marked the locations for us, because it’s kind of hard to tell where the furthest locations are otherwise. I’ve made a map to give you the locations, but you’ll need to look for a little indestructible sign that marks the exact spot you need to visit.

How to deal damage to opponents with a pirate cannon

It’s exciting that we get a challenge that uses the pirate cannons and while it looks difficult on the surface, it might be easier than you think. There are cannons in several locations around the map (I’ve marked them all below), but none have more than the new Lazy Lagoon. For this reason, most people will probably be landing there and remember you only need to get 100 damage, which isn’t very much. If you focus on it, you should be able to get through this pretty quickly.

For this one, you’ll need one chest each at three different named locations to complete the challenge. A large group mode might be the safest, but you could do it in any mode. Obviously it will matter which way the Battle Bus goes, but your best bet here is to find three locations that are close together. As examples, you might try Junk Junction to Haunted Hills to Pleasant Park. Another option would be Frosty Flights to Polar Peak to Shifty Shafts. The idea is to go to a coastal town first, then travel inward, because the storm will soon be closing.