True wireless headphones are all the rage, but until now they’ve all been in-ear models that nestle inside your ear and are relatively compact. But I figured it was only a matter of time before someone produced a different kind of cord-free headphones. Now someone has: Human Inc., a Seattle-based startup, has developed a pair of over-ear true wireless headphones that it simply calls Human Headphones. They also convert into a tiny portable Bluetooth speaker and have a language translation mode, but their true wireless nature is what makes them unique.

I’ve been playing around with a review sample for a few days. I can’t say I’m in a rush to go out and buy a pair for $399 — yes, that’s a tad pricey — but they do have some intriguing elements. Several years in the making, the headphones are only available on the company’s website and international prices don’t appear to be available, but $399 converts to about £330 or AU$590.

For starters, they sound decent. They have 30mm drivers and deliver the big sound you’d expect from full-size headphones. They’re a touch bassy, but they definitely have some punch and offer decent clarity. They also seem well engineered, with responsive touch controls and an attractive matte black finish. They adhere magnetically and transform into a shell-like form that charges in a small docking station via USB-C. Tucked away into their included carry case, the whole package takes up very little room in a bag — it’s much more compact than your typical set of over-ear headphones, weighing in at 3.68 ounces (104 grams). Too bad there’s no noise-canceling feature.

Wearing them takes a little getting used to. To turn the headphones on you simply unclasp them. Each earpiece has a hinged clip mechanism that gently clips onto your ears — you give the earpiece a counterclockwise turn to get it on. They were pretty secure on my ears and I found them fairly comfortable to wear, but they’re not light enough to run in. I think they’d work better for people with medium to larger ears. They don’t seem to fit small ears securely.

I can’t say I loved how the Human Headphones looked on me and I can’t say anyone paid me any compliments when I was wearing them (a few people cringed). But they looked fine on other people, particularly those with longer hair who could hide them a bit, and one could argue that they looked no weirder than the AirPods did when they first came out and were the butt of numerous jokes. You can wear glasses with them, as well as earrings, and they won’t mess up your hair.

The reality is that they’re much more suited to wearing indoors. That’s because they’re designed to rest against your head and cheek but not clamp down like a traditional over-ear headphone that has memory foam pads and creates a tight seal to passively block out noise. These cover your ears like ear muffs but a lot of sound leaks in, making them harder to use in noisier environments like the streets of New York. In that sense, they’re a little like AirPods.

Indoors they perform better. That goes for calls as well. The headphones are equipped with beam-forming microphones designed to precisely capture your voice and reduce noise around you so callers can hear you better. On the streets of New York I had trouble hearing some callers because of all the sound leaking in and they said I only sounded OK. However, the reviews on call quality improved after I headed into quiet environments.

As a wireless speaker and speakerphone the Human Headphones can’t measure up to even a $30 Bluetooth speaker — there isn’t much bass — but it does play louder and sounds better than your smartphone’s speakers, so it’s a useful little bonus. Alas, there’s no stereo mode — the earpieces have to be clasped together to work in speaker mode, but there’s just enough width to the soundstage to make the speaker sound a little bigger than it is.

I got a quick demo of the translation mode and it worked well (the company says you can translate up to 11 different languages), but I haven’t been able to test it out in the real world yet. There’s also a “blend mode” that allows you to hear the outside world and talk to someone while you’re still listening to audio on the headphones. The Human app is available for iOS and Android and the company told me it’s working on possibly adding new features such as EQ settings to customize the sound profile.

As for battery life, Human says you can get up to 9 hours of continuous use (that’s decent compared to the AirPods’ battery life) and Bluetooth range is rated for up to 100 feet (30 meters). The headphones use Bluetooth 4.2 not the latest Bluetooth 5.0, but I didn’t encounter any major connectivity glitches in my few days of using them.

I came away from my initial trial impressed that someone had the vision to develop this product and get it to market. It’s strange and overpriced. But there’s the makings of something interesting here. The next step would be to figure out how to get a tighter seal around your ear. But at least you’re getting some airflow to your ears, so they don’t steam up like they do when you’re wearing traditional over-ear headphones during the hot summer months. And I’d bet they’d provide some warmth for your ears in freezing weather. That’s not something the AirPods can do.

I’ll post a final review of the Human Headphones after I test them for a bit longer, but they’re available now. Human does a “30-day risk-free guarantee” so you can try them and return them if you’re not satisfied.

Best Tax Software for Self-Employed in 2022: Freelancers and Gig Workers,... 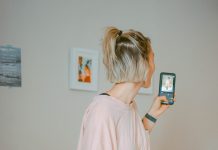 Why That the iPhone 11’s Shortage of 5G Will Not Damage...