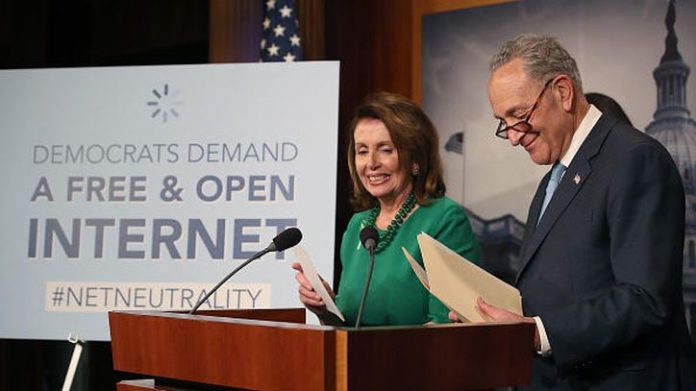 Democrats still aren’t done fighting for net neutrality. House Speaker Nancy Pelosi and other House and Senate Democrats on Wednesday introduced the Save the Internet Act of 2019, which aims to restore open internet rules that were repealed in 2017.

The Obama-era rules, which lasted from 2015 to 2018, banned broadband providers from slowing or blocking access to the internet or charging companies higher fees for faster access. Democrats in Congress have said the repeal allows for large broadband and wireless companies to “control people’s online activities.”

‘Save the Internet Act’ aims to restore net neutrality

“Eighty-six percent of Americans opposed Trump’s assault on net neutrality, including 82 percent of Republicans,” Pelosi said during the press conference on Wednesday. “With Save the Internet Act, Democrats are honoring the will of the people.”

The legislation is being lead-sponsored by Massachusetts Sen. Edward J. Markey in the Senate and Pennsylvania Rep. Mike Doyle in the House. Markey also tweeted out a copy of the bill on Wednesday, saying nearly every Democrat in the Senate had joined him to introduce it.

The Federal Communications Commission responded to the bill saying that the current “light-touch” to regulating the internet has been a success.

“The FCC’s return in 2017 to the bipartisan, light-touch approach to Internet regulation has been a success,” Tina Pelkey, spokeswoman for Chairman Ajit Pai, said in a release. “It has proven wrong the many hysterical predictions of doom from 2017, most notably the fantasy that market-based regulation would bring about ‘the end of the Internet as we know it.’ The Internet in America today is free and vibrant, and the main thing it needs to be saved from is heavy-handed regulation from the 1930s.”

In December 2017, the Republican-led FCC voted to repeal Obama-era net neutrality rules, which officially ended in June 2018. In August, attorneys general from 22 states, as well as activist groups and companies including Mozilla, filed suit, alleging the FCC arbitrarily rolled back net neutrality rules and overstepped its authority to ban states from passing their own regulations.

“When the Republican-led FCC repealed net neutrality rules, they handed the big internet service providers the car keys and left American families and small businesses standing on the sidewalk,” said Senate Minority Leader Chuck Schumer in a release. “Special interests and the biggest corporations shouldn’t get to decide how consumers access the internet. We call on Republicans to join the vast majority of Americans who oppose the FCC’s horribly misguided decision and support this legislation to restore net neutrality.”

Tech giants, such as Amazon and Facebook, have also spoken out against the repeal of net neutrality. On Wednesday, Etsy said it supports this new bill.

“Etsy sellers depend on strong net neutrality protections to compete online,” Althea Erickson, head of advocacy and impact for Etsy, said in an email statement. “We are hopeful other lawmakers will recognize how important this issue is to small and micro-businesses across the country, and will join the effort to protect and preserve a free and open internet.”

Can CBD make you fail a drug test?