Between Equifax’s colossal January breach and 220 million Facebook users having their phone numbers accessed last week, It seems like major corporations are having security problems all over the place. It’s all enough to make you antsy about using your credit card online. In Japan, though, a store clerk has stolen credit card information the old fashioned way: Looking at and memorizing the details of over 1,300 customers, according to local news.

The 34-year-old clerk worked at a mall in Koto City, near Tokyo. Police allege he memorized the 16-digit credit card number, security code and expiry date of customers during the small period of time it takes to complete a purchase transaction. This is all according to a translation by SoraNews of reports from Sankei News and Hachima Kiko publications.

Police added that, after arresting the clerk, they found a notebook containing the credit card details of 1,300 victims, reports ANN News. The scammer, despite apparently having a Sherlock Holmes level of memorization ability, led police straight to him by using stolen credit card information to buy two bags valued at 270,000 yen (approximately $2,500) — which he then had mailed to his own address.

Credit card breaches certainly happen online. Most recently, MoviePass left the credit card details of tens of thousands of its users vulnerable after failing to password protect a database. In the case of the Tokyo clerk, Apple’s new credit card would have actually been a huge help — it’s numberless. 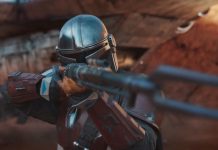 The Mandalorian: Everything we all know concerning the new Star Wars...