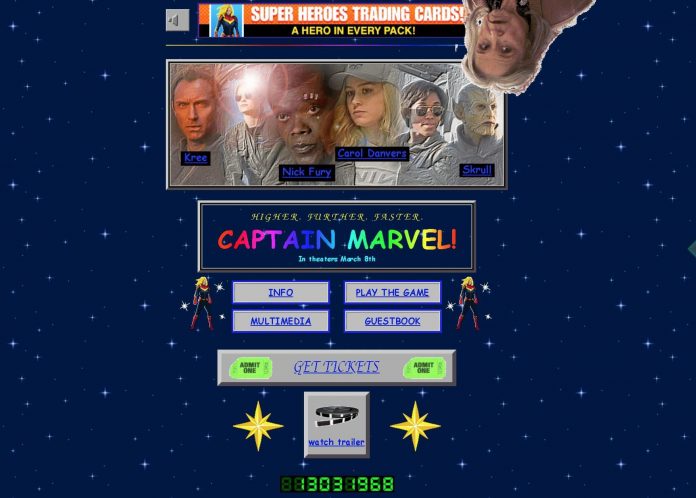 Remember the websites of the 1990s? Rainbow text! Flashing lights! Blinking text and Comic Sans! Guestbooks and hit counters and dancing babies! Slip back into the era of slap bracelets and clear cola when you visit the official Marvel website for the upcoming Captain Marvel feature film.

The movie, about Carol Danvers and her super-powered alter ego, is set in the 1990s, in part because Marvel’s never done that before. “It allows us to play in an area that we have never played in before, and tapping into a ’90s action genre was fun for us,” Marvel Studios President Kevin Feige told the Toronto Sun.

So the website perfectly executes the theme, looking like a Lisa Frank Trapper Keeper threw up on it. Scroll down and play the “guess the Skrull game.” Watch for the shape-shifting old-lady bus passenger from the trailer to show up and see if you can punch her. Read through the oh-so-’90s guestbook, which is filled with decade-appropriate mentions of dancing babies, Y2K and even an “all your base are belong to us” mention. (Youngsters, ask the nearest old person.)

Captain Marvel is due out March 8 in the US and UK, and March 7 in Australia.