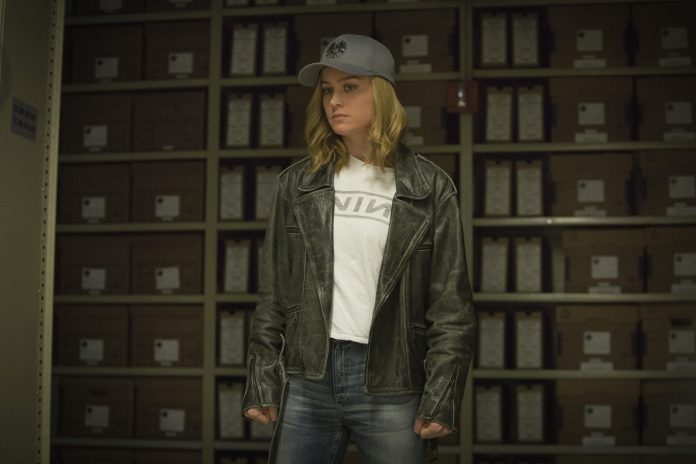 As the Marvel Cinematic Universe’s first film helmed by a female superhero and the first co-directed by a woman, Captain Marvel has a lot to live up to. The stakes are high. Especially considering DC already released its own successful, critically acclaimed film led and directed by women: Wonder Woman.

Let’s just say Captain Marvel was worth the wait. It’s two hours of pure female empowerment packaged with all the visual power you’d expect from a Marvel blockbuster. Brie Larson is fierce and effortlessly cool as a fighter-pilot-turned-space-warrior trying to discover who she really is. And it doesn’t hurt that Hole, Elastica and Nirvana set the beat with some of the biggest hits of the ’90s.

Larson is Carol Danvers, a member of the alien Kree race’s elite military unit Starforce. Her mentor Yon-Rogg, played by a yellow-eyed Jude Law, tries to teach her that the most dangerous things a warrior can encounter are emotions. Danvers doesn’t always listen. She’s struggling to control her powers, but also trying to figure out why she can’t remember her past.

After a mission gone wrong, Danvers finds herself on Earth in 1995 — a planet the Kree refer to as C-53 and a “shithole.” Here she’ll make the acquaintance of Nick Fury (Samuel L. Jackson) — an agent of S.H.I.E.L.D. with two eyes and a full mane of hair.

Carol and Fury become a sort of odd couple with little in common besides mutual respect. They share some of the funnier, sharper banter in the movie and he reminds her that emotions don’t just make humans human, they’re often advantageous.

But there’s no love interest in Captain Marvel. Not even a hint of it. And I’m more than fine with that. As much as I enjoyed Chris Pine’s Steve Trevor in Wonder Woman, this is an origin story minus the flirtation and seduction and it’s all the stronger for it. Danvers comes to terms with her powers, learns to control them, and confronts a society that tells her women can’t race cars, join the army or become fighter pilots. That struggle is more than enough to keep her (and us) engaged.

Captain Marvel: What you need to know

Don’t get me wrong. Captain Marvel is far from alone. As well as Fury, she also reunites with her longtime friend Maria Rambeau (Lashana Lynch) and Maria’s daughter Monica. “You were the most powerful woman I knew right before you could shoot fire from your fists,” Maria tells Carol during a touching conversation when our protagonist needs a bit of a confidence boost.

Rounding out the excellent cast, Annette Bening plays the person Carol admires most, even when at times she doesn’t recall why. It’s very telling that Bening’s character isn’t about fighting wars, but about ending them. That philosophy will influence Carol’s values and give her reasons for becoming a full-fledged warrior and protector.

The diverse array of female characters puts Captain Marvel alongside the undeniably feminist Black Panther — both pass the Bechdel test with high grades. Captain Marvel is yet another title that proves you can have a big superhero film that doesn’t forget to represent half of the world’s population in a non-reductionist way.

Previously known for creating low-key stories such as Half Nelson, the writing and directing pair of Anna Boden and Ryan Fleck are the latest in a line of interesting choices to helm an effects-driven superhero epic. And just like Taika Waititi with Thor: Ragnarok or Ryan Coogler with Black Panther, Boden and Fleck infuse Captain Marvel with plenty of heart.

They avoid flashbacks that would slow the pace and clumsy exposition is almost nonexistent. We learn about Carol at the same gradual pace that she does — through interesting, well-executed narrative devices like Skrull leader Talos (Ben Mendelsohn) invading Carol’s memories.

You learn about Danvers’ humanity through her failings. Falling but standing up ready to attempt again becomes one of our hero’s driving forces — and a quality that reminds viewers that sometimes the most important thing in life isn’t necessarily success, but continuing to try.

Then there are all those ’90s references. Panama Jack’s boots and coveralls. Turtlenecks. The Fresh Prince of Bel-Air. Alta Vista. Blockbuster video-rental stores and telephone booths. Pagers. Early (and slow) Macs. The album poster from Smashing Pumpkins’ Mellon Collie and the Infinite Sadness.

It also helps that Captain Marvel’s soundtrack is underscored by Nirvana’s Come As You Are, Elastica’s Connection and No Doubt’s Just A Girl. Obvious choices maybe, but it’s hard not to tap your feet to the pounding rhythm of Hole’s Celebrity Skin even if you’ve never been a grunge devotee.

Of course the movie isn’t just a ’90s music video, although there are moments when you might think you’re actually watching a ’90s action movie or buddy film with a touch of Terminator 2 or even Die Hard with a Vengeance. The visual effects are seamlessly integrated into the story to the point where you often forget they’re there. Like Fury’s digital de-aging: it’s hard to be bothered by it because it just looks natural.

There are perfectly choreographed minimalistic fight sequences between two barefoot characters and there are full-blown explosion-driven space battles. Carol flies in space, clad in her blue, red and golden suit, leaving a luminous trail across the sky wherever she goes. “You know you’re glowing, right?” Fury asks Carol at one point.

The movie also pays homage to the late Stan Lee, who was still around to film his cameo for this movie and Avengers: Endgame. The legendary comics creator, who died in November at 95, is remembered in the Marvel Studios opening theme sequence and a “Thank You Stan” message opens the movie.

Why we love the women of Marvel

Not everything in Captain Marvel is what it appears. There are a couple of twists you won’t necessarily see coming. And yes, the feline Goose steals every single scene.

At one point during Captain Marvel, Carol is wearing a Nine Inch Nails T-shirt, leather jacket and distressed jeans. Only Happy When It Rains by Garbage plays in the background. Fury summarizes the whole thing perfectly: “Grunge is a good look for you,” he says.