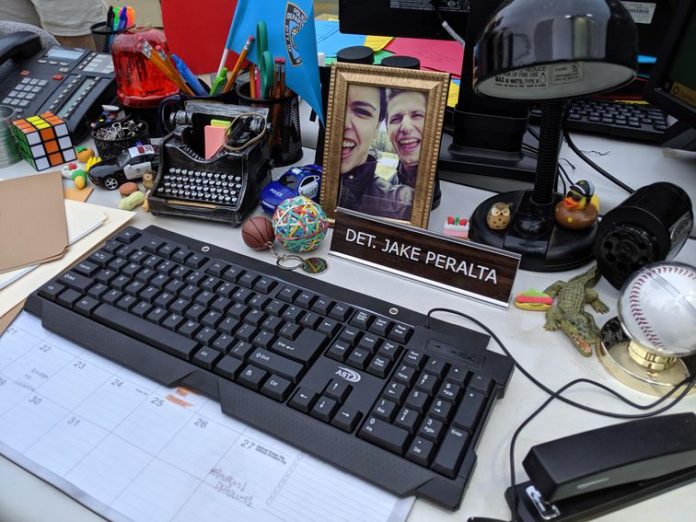 At San Diego Comic-Con, I’m sorting through a freezer full of frozen lasagnas and looking for an exploration date. Next to me is a poster that says “Don’t Poop on the Subway.” The goal is to find the combination to a safe and wield a WWE-style championship belt. It’s not your typical law enforcement training test.

But that’s what I’m doing as I try out an immersive experience set up by NBC to promote Brooklyn Nine-Nine, a sitcom about misfit cops starring Andy Samberg, which joined the network’s stable of comedies last year.

The game is one of many “activations” set up by big brands at Comic-Con — corporate speak for what’s basically an elaborate ad that lets conference-goers experience elements of shows or movies in real life. Amazon set up a politically tinged activation for its new show Carnival Row, which touches on racism and segregation, and AMC created a zombie apocalypse for The Walking Dead.

Brooklyn Nine-Nine’s activation is part escape room, part comedy act. The premise is that you’re part of a group of potential new recruits vying to join the show’s fictional 99th precinct. You’re first led to a briefing room where an actor playing an officer basically acts as a warmup comedian interacting with guests.

“You’ve already passed the hardest part — the endurance test,” the officer says to guests who’ve waited more than an hour for the attraction.

The guests then see a video starring cast regulars: Samberg, who plays Jake Peralta; Terry Crews, who plays Terry Jeffords; and Joe Lo Truglio, who plays Charles Boyle. Samberg and Truglio are both dressed Comic-Con-appropriate, with Samberg in Game of Thrones garb and Truglio as Detective Pikachu.

From here on out, the experience is an escape room. The game hews closely to the show’s fan-favorite “Halloween Heist” episodes, in which Peralta tries to outwit his captain. Guests are led to a re-creation of the Brooklyn Nine-Nine set, including each character’s desk. Attendees are divided into groups and given mini tasks to perform, like sorting out police records or trying to find the right frozen lasagna. After completing each task, you get a digit of a combination for a safe. When I went through the activation, my team won. One of my teammates, a reporter from LA Weekly, cracked open the safe.

The show, a cult favorite, premiered on Fox in 2013, but was cancelled last year. A day after the cancellation was announced, NBC said it would pick up the show. It premiered on the network in January and was quickly renewed for a seventh season.

The Brooklyn Nine-Nine escape room is the centerpiece of NBC’s marketing blitz at Comic-Con.

A promotion for Superstore, a comedy about the staff at a fictional Walmart-like shopping center called Cloud 9, takes you into that story. NBC transformed the lobby of San Diego’s Hard Rock Hotel into a shopping aisle where you can take employee-of-the-month photos and buy stuff from other NBC shows, like the Cones of Dunshire game from Parks and Recreation and Dunder Mifflin paper from The Office. To promote The Good Place, a sitcom about four people navigating the afterlife, NBC turned a diner at the Hard Rock into the Interdimensional Hole of Pancakes, or IHOP, a key setting from the show’s third season.

The activations are open to Comic-Con attendees throughout the show.

Colman Ma - September 7, 2018
0
ARK Partners with Major League Hacking This is a submitted sponsored story. CCN urges readers to conduct their own research with due diligence into the...