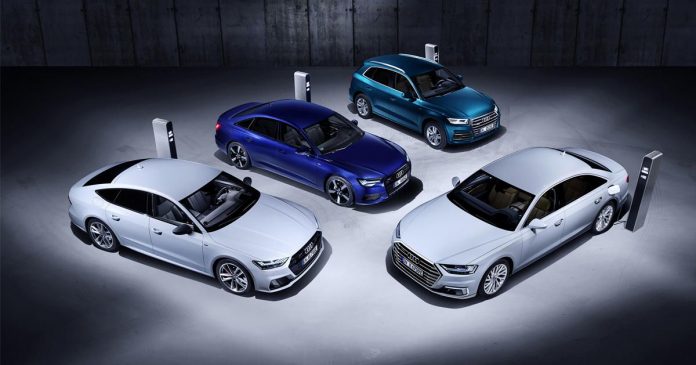 Audi may already have mild hybrids and a battery-electric vehicle, but its latest unveil shows there’s plenty of room in the middle for additional electrification.

Audi on Monday unveiled a swath of plug-in hybrids, all of which will make their debut at the Geneva Motor Show next week. Not only do the vehicles offer extra efficiency by way of an integrated battery and electric motor, certain models offer multiple power outputs, so buyers can opt for a sportier variant, if they prefer. Four model lines are included in this announcement: A6, A7, A8 and Q5.

The A6, A7 and A8 all rely on a lithium-ion battery comprising 104 pouch cells stacked into eight modules. It has a capacity of 14.1 kilowatt-hours. The Q5’s lithium-ion battery has the same capacity, but it’s made up of prismatic cells, which are differently shaped. No matter the model, Audi expects each battery to provide an all-electric range of about 25 miles by Europe’s WLTP testing standard. If the vehicles come to the US, EPA estimates are usually lower than WLTP. The batteries hide under the trunk floor.

Each vehicle connects the battery and electric motor to a direct-injected, turbocharged gas engine, although Audi didn’t specify the size or output just yet. On the A8, the electric motor is joined to its eight-speed automatic transmission, but the other models ignore that cog-swapper in favor of a dual-clutch transmission. The A6 and A7 PHEVs are also available in a sportier variant that offers a stiffer suspension and a higher boost from the electric motor.

In addition to traditional drive modes like Comfort and Dynamic (sport), there are three PHEV-specific modes on offer. EV tries to operate on the battery alone, while Hold retains the battery’s charge for later use. Auto prefers to hang out in the background, providing a mix of electricity and gas-driven motive force. The system can recuperate some energy through regenerative braking. The PHEVs also have an active accelerator pedal, which provides a “pressure point” to help the driver be as efficient as possible.

Prior plug-in hybrids have carried the “E-Tron” moniker, but times have changed. Now, Audi’s proper EVs will be the only vehicles to wear E-Tron badges, while plug-in hybrids will now live under the “TFSI e” name. But no matter what they’re called, keep your eyes on Roadshow next week, because we’ll be reporting live from the Geneva show floor, bringing you these cars and a whole bunch more.