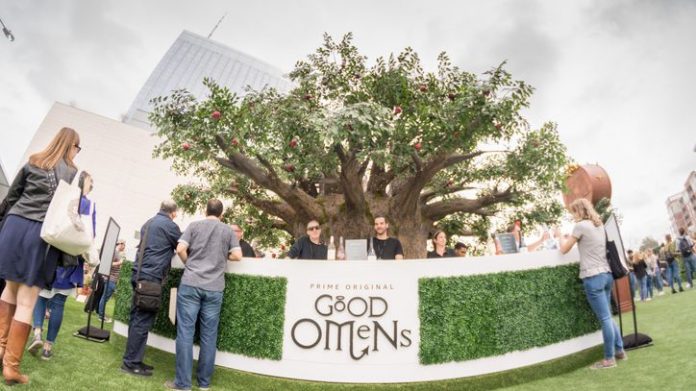 I should have figured Hell, or Hell adjacent at least, would be hot.

It’s Saturday at SXSW, and I’m at the Garden of Earthly Delights, an outside event space from Amazon Prime Video promoting the upcoming limited series Good Omens. It’s flirting with 80 degrees, and my black blazer is slowly baking me as I watch angels and demons bicker with each other.

“Do you feel the heat of the Apocalypse descending on us?” a guy with one of those signs heralding the end asks passersby.

Good Omens is a six-part series that follows the unlikely partnership between an angel named Aziraphale (played by Michael Sheen) and a demon named Crowley (played by David Tennant), who have grown so fond of the world, they don’t want it to end. It’s based on the 1990 fantasy novel Neil Gaiman (who is also Good Omens’ showrunner) and Terry Pratchett.

Amazon Prime Video is one of several companies that brought immersive themed experiences to SXSW. HBO, for example, tied an American Red Cross blood drive into a Game of Thrones event called Bleed for the Throne.

At SXSW, the forces of good and evil are partying it up at the Garden of Earthly Delights, which is set up in a lot that was home to a food truck court last year.

On one side, The Knotty Bar (a tent where you can get your hair done) and the Hellhound Puppy Pound, filled with the fluffiest of adoptable puppies. I stand at the pen watching a tiny black pup step in his water bowl and wonder about the moral implications of stealing a dog that’s supposed to be from Hell and just running away. Who knew Hell’s creatures could be so cute?

On the other side, you can get a manicure and a hand massage, and visit A.Z. Fell’s bookstore, a nod to the Aziraphale’s shop in the book, which is basically a front for his old-book collecting habit.

If Heaven offers books, and Hell offers puppies, I’m going to have the most indecisive eternity ever.

In the middle of all this, is a giant tree. The tree, actually, if the Book of Genesis is your jam. Twenty-feet tall, with built-in beer taps, it’s big enough to also be a bar. And if you get an apple from its branches, you get an apocalyptic prophecy and a pin.

All of it looks like God had a Anthropologie gift card to burn through, and went all-in on rustic-chic furniture and hipster plants.

If the end is nigh, at least we’ll be going out in style.